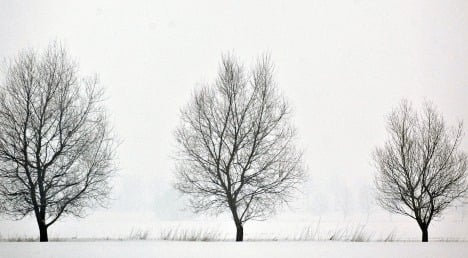 The researchers at the University of Freiburg found that electrical signals generated by light-sensitive cells at the back of the eye in response to contrasting shades in an image are weaker in depression sufferers than in healthy people.

In fact, the more depressed a person is, the less visual contrast they appear to experience, the researchers found, suggesting the world could actually appear dull and washed out in the minds of severely depressed people.

“It is quite an amazing finding,” University of Freiburg professor of psychiatry and study author Ludger Tebartz van Elst told The Local. “Feeling melancholic is often compared with darkness and grey. That could be just a literary tradition, but it might be there is some subconscious physical reality behind it.”

Professor van Elst and his team worked with 40 people who had previously been diagnosed as depressed and 40 healthy people. The subjects were shown screens of chequered dark grey and light grey squares which flipped back and forth – each square alternating between dark and light – 12 times per second.

As the scientists gradually increased the contrast between the dark and light squares, moving them closer to black and white, the electrical response in the retinas – the layers of light-sensitive cells at the back of the eye – of the healthy patients was much stronger than in the depressed patients.

They found a “strong and significant correlation” between the “contrast gain” – the difference between lighter and darker shades – and the severity of depression, they reported in their paper. Intriguingly, the correlation persisted in depressed patients regardless of whether or not they were taking medication.

“If you open a photo in (the computer program) Photoshop and take out the contrast, then you still see the image, you can still make out all the objects, but the visual experience is very different,” Professor van Elst said. “I feel it’s very similar in depressed patients.”

The neurotransmitter dopamine is thought to play a role both in depression and also the signals generated by retina. This could explain the correlation, Professor van Elst said.

He stressed the team’s results needed to be confirmed by other studies. But if the findings prove reliable, contrast perception could prove a vital tool in diagnosing depression, he said. Until now, diagnosis has relied on interpretation by psychiatrists and patients’ responses to questionnaires.

Crucially, it could help doctors quickly tell what type of depression a patient is suffering from – such as bipolar or monopolar depression – and treat them accordingly. Such distinctions currently can take months or years.

The study could also prove highly valuable to the development of drugs to combat depression, Professor van Elst said. All drugs are first tested on animals but diagnosing degrees of depression in mice is clearly a challenge. A more reliable diagnosis – assuming animals’ retinal signals respond the same way – could make drug testing on animals easier.

Next, Professor van Elst and his team, which is an unusual collaboration between psychiatrists and ophthalmologists, plan to study the reactions to blue and yellow contrast and also to find out whether the world starts to look brighter as depressed patients get better.

Their current study is published in the latest issue of the journal Biological Psychiatry.

In an accompanying commentary, the journal’s editor, Dr John Krystal, wrote: “These data highlight the profound ways that depression alters one’s experience of the world. The poet William Cowper said that, ‘Variety’s the very spice of life,’ yet when people are depressed, they are less able to perceive contrasts in the visual world. This loss would seem to make the world a less pleasurable place.”