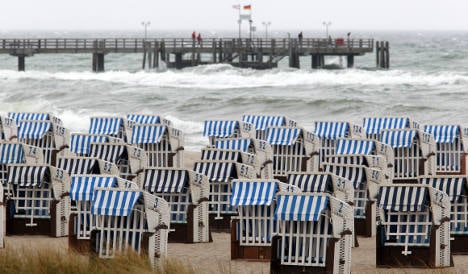 The tail-end of low pressure system “Quendeline,” which has brought sub-tropical air for the past few days from the Mediterranean and northern Africa, will give way to rain, storms and a long-awaited cooling.

“On its backside, fresh sea air will finally bring the long-awaited cooling,” said DWD meteorologist Thomas Ruppert. “The wind will perk up and shift to a northwesterly direction. While Saturday will remain temperamental, the weather will calm down on Sunday and the rain will ease.”

The warm weather on Thursday was set to give way to rain and some storms, the statement said.

In the east and southeast, temperatures will reach 30 to 34 degrees Celsius, while the rest of the country will stay cooler, with highs of 23 to 29 degrees.

The east will likely remain warm overnight with lows of about 20 degrees, while the low mountain ranges in the west will drop overnight to 13 degrees, the statement said.

Friday will bring widespread rain accompanied by storms in parts of the country, particularly in Alpine areas. The west will also see storms over the course of the day.

Highs will range from 21 to 26 degrees, dropping to between 10 and 16 degrees overnight, the lowest temperatures the country has seen in several weeks.

Patchy cloud cover will greet the eastern half of the country on Sunday, along with light showers. Highs will range from 19 degrees on the North Sea coast and mountain areas to 25 degrees in the Upper Rhine area.