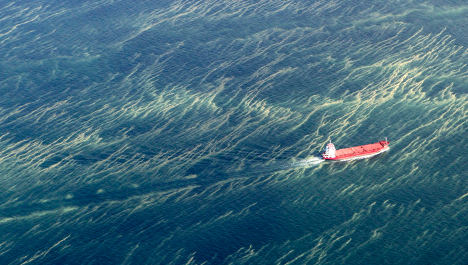 The prolonged heat and lack of wind or storms has given the cyanobacteria the chance to form the largest carpet since 2005, covering about 377,000 square kilometres of the sea’s surface – roughly Germany’s entire land area.

The Office for Environment, Nature and Geology in the northern state of Mecklenburg-Western Pomerania dispatched an observation ship on Thursday to take water measurements. The results were expected to be released Friday.

But early indications were that the algae consisted of the types Anabaena and Nodularia.

“The types are potentially toxic and can cause skin inflammtion,” said Karin Stein, head of the environmental analysis departments.

Swallowing large quantities of water carrying the algae could cause gastro-intestinal problems, she added.

“Really the animals mostly endangered by it are those that drink the polluted water,” she said.

Nevertheless, authorities said it is safer not to swim in areas where the algae is visible.

Swimmers on the beaches of Schleswig-Holstein and Mecklenburg-Western Pomerania need not be too worried for the moment, though.

“The beaches in eastern parts of Rügen, Usedom, Stralsund and Greifswald are free from blue-green algae according to current measurements,” said Anja Neutzling, spokeswoman for health authorities in Mecklenburg-Western Pomerania.

Nonetheless, warning signs were put up at four swimming spots at the lagoon on the island Usedom on the weekend.

Jochen Lamp, head of the Baltic Sea office for the World Wide Fund for Nature, said about 90 percent of the semi-enclosed sea was affected by the algae film.

The carpet stretches from Finland down to the Curonian spit on the coast of Lithuania, over to the Bay of Pomerania on the coasts of Germany and Poland and across to Rügen, the German island off the coast of Mecklenburg-Western Pommerania, Lamp said.

While such blooms are natural phenomena, this year’s has spread to great dimensions because of the long period of high temperatures and little wind, coupled with unusually high concentrations of mineral nutrients.

Microbiologist Klaus Jürgens, from the Institute for Baltic Sea Resarch in Rostock, said blue-green algae carpets have spread over the Baltic Sea every summer for decades.

This is largely a man-made problem: the blooms result from the high concentrations of phosphates, most of which come from agriculture, Jürgens said.

He said the northern and central parts of the sea were most affected – areas off the coasts of Finland, Sweden, Russian and parts of the Baltic states.

“The satellite pictures are being analysed at the moment,” he said.

Jürgens said that a good-sized storm would quickly break up the bloom, though.