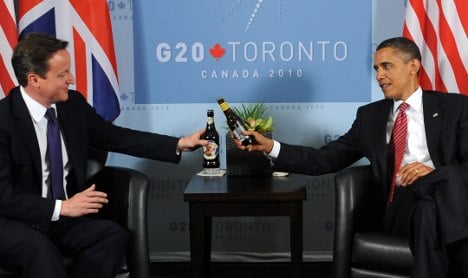 Cameron revealed that he had quaffed down Chicago beer, given to him by President Barack Obama, while watching the quarterfinal showdown between Argentina and Germany and it had unexpected results.

“I enjoyed it so much that when I watched Germany beat Argentina, I actually cheered for Germany,” Cameron said at a White House news conference. That’s a big admission for a British person to make. So the beer is obviously very effective,” Cameron said, introducing new levels of frankness to the vaunted US-American “special relationship.”

Before facing Argentina, Germany humiliated England in the tournament, turfing them out of the second round stage, in a 4-1 rout.

The Germans have regularly broken English hearts in big tournaments, since the rare moment of joy for England, when they beat the old enemy in the 1966 World Cup final.

To be fair to Cameron, he was not left with much of a choice in the quarter-final match-up, as Argentina have inflicted their share of soul crushing moments on the hapless English squad.

Obama and Cameron made a beer bet on the United States v England World Cup group stage clash, which ended in a 1-1 draw, so swapped beverages from their respective homelands when they met at the G20 summit in Toronto last month.

The US leader presented Cameron with a bottle of Goose Island 312 from his home city of Chicago, while Cameron gave Obama a bottle of Hobgoblin, made in his constituency in Oxfordshire, west of London.

During the press conference, in the ornate East Room of the White House, Obama and Cameron referred to one another as “Barack” and “David” – seeking to add a personal touch to their official deliberations.

Obama also went out of his way to say “special relationship” – as soon as he opened his mouth – seeking apparently to scotch impressions that he did not revere the long alliance with Britain as his predecessors had.

It was also one of the rare occasions when Obama was confronted with a younger, fresher leader during his gruelling 18-month presidency.

The youthful Cameron, 43, is not yet aged by the cares of office, after moving into 10 Downing Street only in May.

Obama, 48, is graying and sometimes appears fatigued, as he battles the lingering economic crisis, stewards the gruelling Afghan war, and braces for a bitterly contested mid-term congressional election season in November.

Cameron kept the football metaphor going during a press conference following his first talks at the White House with Obama.

“While at the World Cup our teams could only manage a score draw, I believe our relationship can be a win-win,” he said.