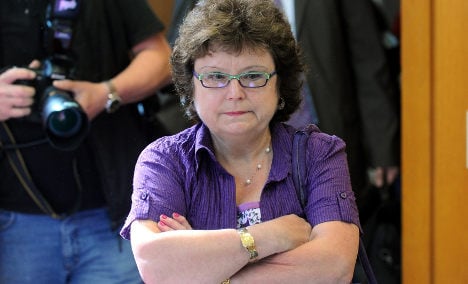 Teacher Marion V. at an earlier court proceeding in May. Photo: DPA

The court in Vechta, northern Germany declined to hear the complaint by the 60-year-old geography teacher, who was seeking an injunction against the 16-year-old girl to stop her from making the drawings or spreading rumours that the plaintiff had a paralysing fear of rabbits.

Chief Judge Hermann Pieper did not give a reason for the ruling, but said the case was business as usual. The teacher, who did not appear in court, has the option to appeal.

Witnesses had told the judge that the teacher ran sobbing out of the classroom when she saw the image of a rabbit on the blackboard. The girl denied making the drawings.

Two years ago at another school, the teacher took a pupil to court in a similar case and reached a settlement in which the teenager agreed never again to claim that the plaintiff “freaked out” when she saw a rabbit or heard the word.

Kim Pohl, the student involved in Tuesday’s verdict, had also attended the teacher’s previous school around the time of that incident.

Her mother Corinna Pohl said she was relieved with the court’s decision, saying the girl had suffered “psychological stress” over the case. She added that she could not believe the case had been allowed to go so far.

Judge Pieper said that while the case may seem curious to outsiders, “mobbing and strife in the schools” were frequently brought before the court.