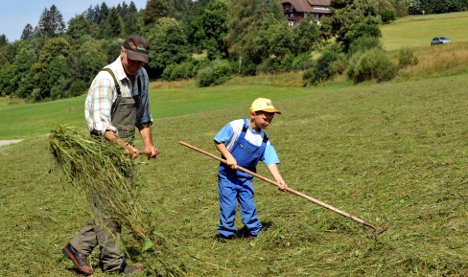 The substance is a plant sugar molecule called “arabinogalactan,” and stops excessive immune system reactions in children if inhaled in their first year, the scientists at the Ruhr University Bochum (RUB) wrote in the “Journal of Allergy and Clinical Immunology.”

“It has long been known that children who grow up on farms are less prone to allergies and allergic asthma,” the researchers said in a statement on Monday. “However, just what it is that protects them remained a riddle for a long time.”

Study leader Dr. Marcus Peters, from the Department of Experimental Pneumology, said that finding the protective substance was “like looking for the proverbial needle in the haystack,” the statement said.

Peters tested stable dust from farms in Germany, Austria and Switzerland, finding that more than 10 percent of the mainly plant-based material was arabinogalactan, a molecule that is common in crops used for feeding livestock such as Meadow Foxtail.

Researchers then tested whether the substance had any effect on mice when they were exposed to allergens. They found that dendritic cells, which spur immune system reaction, behaved differently, suppressing immune reaction when arabinogalactan was introduced.

“The researchers were not surprised that a grass component – of all things – protects children against hay fever,” the statement said, adding that the key was getting high doses in early life.

The RUB scientists now plan to research whether the arabinogalactan can be used to treat allergies and asthma.