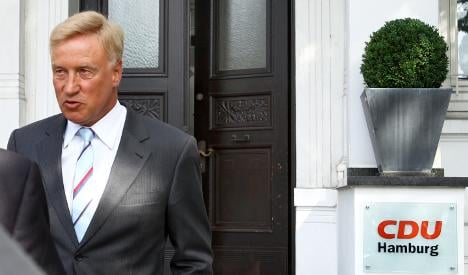 Beust has been mayor since October 2001, but the rare political alliance of his conservative Christian Democrats (CDU) and the environmentalist Greens (called the GAL in Hamburg) has only been in power since 2008.

“There is a time for everything, and of course that applies to me too,” he said at a press conference. “And that is why I have decided not to stand for re-election in 2012.”

Beust has led the CDU for four state elections, after three of which the CDU played a part in the government. He said a fifth time around was not necessary.

He denied his decision had anything to do with the outcome of Sunday’s referendum over school reform. Beust’s coalition could see its controversial plans to extend the city’s common primary schools to the sixth grade torpedoed by angry parents.

With Beust’s departure, Chancellor Angela Merkel’s conservatives have now lost their sixth state premier over the past year.

Thuringia’s CDU premier Dieter Althaus stepped down last year after a poor election result. He was then followed Günther Oettinger from Baden-Württemberg, who became an EU commissioner. Roland Koch from Hesse recently stepped down, as did Christian Wullf from Lower Saxony, who was made federal president.

Jürgen Rüttgers was voted out of office in North-Rhine Westphalia in May and stepped down last week from his position as caretaker premier after a minority government was formed.

Rumours have been flying around Hamburg for days that Beust’s departure was becoming imminent, so he could have more time for his personal life after nearly a decade in the public eye.

Talk is already turning to who would follow Beust, with Interior Minister Christoph Ahlhaus seemingly the favourite, but Social Minister Dietrich Wersich has also made it known he would like the job. It was reported on Sunday evening that Beust recommended to his party that Ahlhaus be his successor.

The speculation has created uncertainty within the GAL, which was persuaded by the relatively liberal Beust to form the rare coalition with the conservatives.

“The Greens did not make a coalition with the CDU, rather with von Beust,” political scientist Hans Kleinsteuber told the local paper Hamburger Morgenpost over the weekend. “It would be dangerous for both parties should he resign.”

The paper reported on Saturday that many Greens would have difficulty working with Ahlhaus at the head of the state government as he is regarded as a hardliner.

“He would have to radically change his style as mayor,” the paper quoted an anonymous GAL leader saying. “If he were to continue to play the agitator the coalition would fall apart.”

Social Democrats have called for new elections, urging the GAL to leave the coalition. Hamburg SPD leader Olaf Scholz told the Bild am Sonntag newspaper ahead of Beust’s announcement that the people of Hamburg would not accept a new mayor without elections.