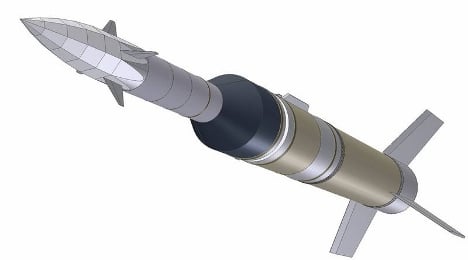 The German Aerospace Centre (DLR) is developing the cutting-edge rocket that can re-enter Earth’s atmosphere without breaking up or suffering much damage, making it an affordable and easy-to-build alternative to than NASA’s ageing space shuttles.

DLR scientists on Friday unveiled the 2.5-metre nose cone for the SHEFEX II program, short for “sharp-edged test flight,” at the DLR headquarters in Oberpfaffenhofen near Munich.

It will take its first test flight next March from Australia’s Woomera rocket launch site. A smaller and slower prototype, SHEFEX I, had a successful test flight from Norway in 2005.

“Our goal is to create step-by-step a re-useable space glider,” said project leader Hendrik Weihs from the DLR’s Institute for Design and Construction Research in Stuttgart.

The new model will be more heat-resistant, cheaper and, most importantly, easier to control in landing than any other type of launchable space craft.

The distinct angular nose cone has eight flat faces, which provide better aerodynamics and cheaper construction than the traditional round cone.

“The rocket therefore has nearly the aerodynamic qualities of a space shuttle, but it’s smaller and doesn’t need wings,” said Weihs.

The €12.5 million-program, funded entirely by Germany, is the only one of its kind – a rocket that can automatically guide itself back to Earth.

“We’re a pretty long way ahead,” said Weihs, adding that he hoped the project would father “a new generation” of rocket science.

NASA has decided to discontinue its space shuttle fleet, sparking a search for a replacement.

“But that system is very elaborate and very expensive,” Weihs said.

Normally, with ballistic capsules such as rockets, which are also used by Russian cosmonauts and Chinese taikonauts, the catch is that they cannot be controlled when they re-enter the atmosphere.

The DLR model, on the other hand, can be guided to a very precise point on Earth’s surface. That will be tested in Australia. The tricky part is controlling the craft as it descends from about 100km to roughly 20km altitude, after which it can be brought down by parachute to land in the desert.

“When the space craft enters Earth’s atmosphere, the air is very strongly compressed and grinds against the body of the craft.”

That can raise the temperature to as high as 10,000 degrees Celsius. The flat planes of the nose cone are specially prepared to deal with this, Weihs explained.

“With the new model, the heat on the planes is reduced. Only the apex will get extremely hot.”

To counter that heat, gas will be pushed through the porous material of the apex, acting as a buffer against the hot, compressed air.

Next year’s test flight will be unmanned, but with further funding, a manned flight is possible. Such progress could be made with co-operation from other members of the European Union or with the United States, Weihs said.