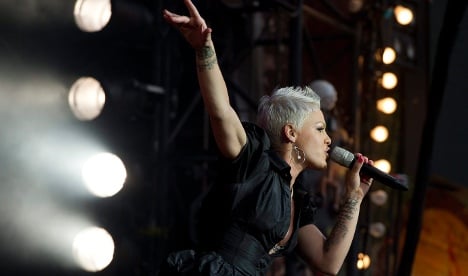 Pink, 30, momentarily reappeared on stage but then abruptly ended the show and went for a medical check-up. She apologised to fans via Twitter message, reassuring them she was not badly hurt.

“I’m in the hospital now, but everything’s fine,” she wrote. “But I am in pain.”

The medical examination showed no bones had been broken and there was no fluid in her lungs, she said in the message.

The bungee-style elastic band was part of a trapeze contraption that was supposed to raise the singer high above the stage – a signature part of her live act.

“I was not properly restrained in the harness,” she tweeted. “It pulled me off the stage, so that I fell into the area behind the barrier.”

After being discharged from hospital, Pink made a hasty exit from Nuremberg. It was unclear whether she would go ahead with a planned open-air concert Friday night near Lake Constance on Germany’s southern border with Austria and Switzerland.

After her husband, motocross champion Carey Hart, posted a message explaining that Pink had lost a fight with a metal fence, the singer tweeted: “No, I won.”