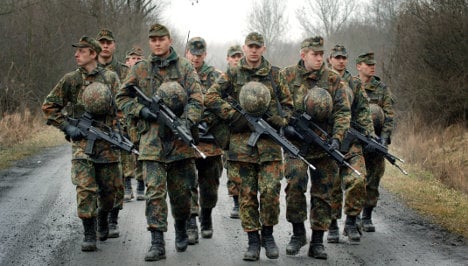 Westerwelle, who is also vice chancellor and head of the pro-business Free Democrats, told daily Hamburger Abendblatt that the recent cut in the length of service from nine to six months was a step in the right direction. But the service should be scrapped with all haste, he said.

“It would be the right decision to stop military service as soon as possible,” he told the paper.

He added that he welcomed Defence Minister Karl-Theodor zu Guttenberg’s vow to “deal with the question of a voluntary military with a completely open mind.”

Guttenberg is engaged in a thorough review of the armed forces in an effort to dramatically slash military spending, part of which will be a decision on whether – and when – to end conscription. Indeed, Guttenberg has professed a personal preference for abolishing the service on the grounds that a modern military should be entirely professional.

Westerwelle insisted the conscription question was not about budget cuts but about justice.

“It cannot be that only 16 percent of an age group fulfil their military service, while many others can improve their job chances in their own time,” he said.

Young people eligible for service have the option of doing civilian service instead – an option many of them take.