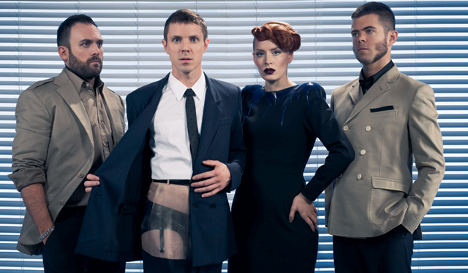 After shooting to global stardom with hits like ‘I Don’t Feel Like Dancin’, the band decided to bin their completed third record rather than put out something that didn’t feel right.

Instead, Shears came to Berlin where he stayed for more than three months to soak up the German capital’s nightlife in order to gain some inspiration.

“I just booked myself a one-way ticket,” said Shears. “I was starting to feel like an old lady in New York.”

Heavily influenced by the Berlin club scene, the new album ‘Night Work’ represents a bold change in tone and focus, ditching the band’s previous fun-loving camp for overt sexuality.

“I rediscovered techno music. I partied a lot, met DJs, and went to Panorama Bar,” said Shears, referring to Berlin’s legendary club Berghain. “I really need this kind of stimulation.”

His excursions into Berlin’s nightlife allowed him to “overcome all the horrible doubts” after meeting British house music producer Stuart Price, who has worked for Madonna, Depeche Mode and Britney Spears in the past.

“We had always produced our stuff ourselves,” the 31-year-old Shears said. “With Stuart we had a real producer for the first time.”

Released on June 28, ‘Night Work’ entered the German charts at number 29. The album explores themes common to the clubbing scene, including community, a sense of identity, but also loneliness.

“Musically it’s more electronic, less instrumental, a synth record from the ground up with a devilish and sadistic quality,” said Shears.

For the album cover the band opted for a photograph taken by Robert Mapplethorpe showing the tightly clenched behind of dancer Peter Reed – as if challenging Scissor Sisters fans to move their own backsides to the dance floor.