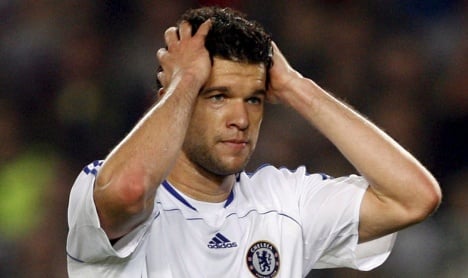 Lawyer Michael Becker, a close adviser to Ballack since 1999, made the remarks two months before the World Cup, according to an essay in Monday’s edition of news magazine Der Spiegel.

The remarks have fuelled concerns that, in contrast to the much lauded racial diversity and tolerance within the national team, football remains a bastion of homophobia.

The essay’s author, Alexander Osang, wrote that Becker had said during a conversation two months before the World Cup at a restaurant in Luxembourg that he knew which players on the team were gay.

A few days later, Becker told a group of journalists and players’ managers at a match played by Ballack’s new club Bayer Leverkusen that there was a former national player who was going to expose a “bunch of queers” within the national team. Osang wrote that others present had merely reacted with nods.

Later, when Osang asked Becker if another national team player was also homosexual, Becker answered that he was “half-gay.”

Osang concluded that homosexuality was “a synonym for anything that Becker did not understand.”

Apparently that included the lighter, more elegant style of play encouraged under the leadership of Germany coach Joachim Löw.

Ballack, who was injured shortly before the World Cup, spent the tournament as a spectator. Although defender Philipp Lahm filled in as skipper, Ballack remains officially the captain of the national team.

Becker told daily Bild he would neither confirm nor deny making the remarks and merely said: “The colleague from Der Spiegel must clearly have misunderstood something.”

He did not elaborate. Whether Becker was talking about the private lives of specific players or simply using offensive language is not clear, however the remarks are likely to intensify concerns that professional football remains an area where homosexuality is a taboo.

Dirk Mesch, spokesman for Bayer Leverkusen, the club where Ballack started out and to which he will return after leaving English side Chelsea FC, distanced the club from Becker’s remarks.

“At Bayer Leverkusen we have absolutely no resentment towards homosexuals,” he said.

The remarks were “personal statements by Mr Becker, which are not connected with Bayer Leverkusen,” Mesch added.