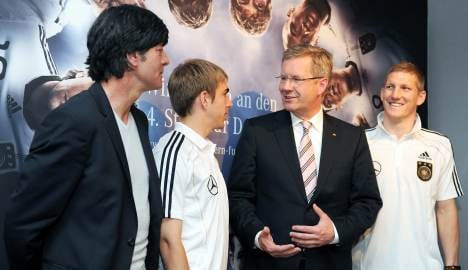 Newly-elected German president Christian Wulff visited the team, just before they left their World Cup base to fly home on Sunday night after they beat Uruguay 3-2 in Saturday’s third place play-off, to announce the news.

Löw is to receive Germany’s Federal Cross of Merit, while the team will receive the Silver Bay Laurel Leaf, Germany’s top sporting award, in recognition of their roles as ambassadors by scoring 16 goals at the World Cup.

“This team is Germany’s best ambassador on the world stage,” said 51-year-old Wulff, who succeeded Horst Köhler, who resigned on May 31 after he appeared to suggest German troops abroad were defending Berlin’s economic interests.

“The team has deserved this distinction, they have won the hearts and minds of people not just in Germany, but across the world.”

“The Cross of Merit for Joachim Löw is in recognition of his work as a coach, we all know how important he has been,” he said. “The whole of Germany has been grateful for what he has done.”

With the coach out of contract now that Germany’s World Cup is over, Theo Zwanziger, the president of the German Football Federation (DFB) says he wants to talk with Löw back in Frankfurt about his future.

“I think we will sit down and put our heads together, I have always said I want to keep working with Löw,” said Zwanziger.

“I think it is right and fair that we need to take time to digest the World Cup.”

Löw has refused to hint whether he will lead Germany into their Euro 2012 qualifying campaign, to be held in Poland and the Ukraine, with the first qualifier taking place against Belgium in Brussels on September 3.

“I have really put the issue on the back burner, I wanted zero distraction and that was the agreement I had with Dr. Zwanziger,” said the 50-year-old, who stepped up to the top post after being Jürgen Klinsmann’s assistant at the 2006 finals and then guided them to the Euro 2008 final where they lost 1-0 to Spain.

“I just need a few more days to get sorted out, I need a few days rest and a chance to think about my situation. Do I have the same level of energy and power to drive this team forward?”

“It is up in the air, I haven’t really thought about it, I have pushed all thoughts about it aside,” he said. “There will be talks in Frankfurt and we will keep an open mind.”

Despite losing captain Michael Ballack with an ankle injury before the tournament started, Löw’s young side has played arguably some of the best football of the World Cup.

Germany hammered England 4-1 in the round of 16 and proved it was no fluke by beating Argentina 4-0 in the quarter-final before losing 1-0 to Spain in the semi-final.

Attacking midfielders Mesut Özil and Thomas Müller, who scored five goals, have earned reputations as dangerous attackers, while captain Philipp Lahm and his deputy Bastian Schweinsteiger have shown maturity to lead the team.

“I am delighted we have taken a big step forward, we have shown we can dominate some big nations, we have played some great attack-minded football which keeps our opponents under pressure,” said Löw.

“Even the match against Spain could have gone either way, Toni Kroos had a chance to score and we could be preparing for the final, the way the team has played is exemplary. We have reached as high as we possibly could.”

“We can all be justifiably proud of all the players, we were up against the odds, we had players dropping out with injuries,” he said.

“We dealt with the problems, the team trained and worked incredibly hard.”