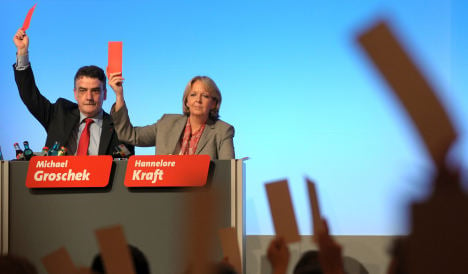 The SPD’s state leader Hannelore Kraft will face a vote in the state parliament for premier on Wednesday. While the Social Democrats and Greens lack an absolute majority, Kraft could be confirmed in second round of voting, which merely requires a simple majority, if members of the Left Party abstain.

At their state party congress on Saturday, the Left Party agreed that their 11 representatives should abstain from the vote to clear the path for Kraft’s election as state premier.

But SPD party chairman Sigmar Gabriel was more optimistic: “I hope that it goes through in the first round of voting,” he told newspaper Bild am Sonntag.

The Christian Democrats, whose centre-right coalition government suffered a stunning defeat at the polls in North-Rhine Westphalia on May 9, said the party would attempt to block Kraft’s election. “Our task as the opposition is to serve up as many defeats as possible for the minority government,” said conservative state parliamentary leader Karl-Josef Laumann.

Conservative state premier Jürgen Rüttgers previously confirmed he would not challenge his SPD opponent in the vote for premier and last month announced he would retire from politics in 2011.

Kraft called the coalition agreement – unanimously approved by 459 SPD delegates in Cologne – a “good outcome” for the planned red-green coalition.

“After just five years in the opposition, we’ve succeeded in voting out the Rüttgers system,” she said.

At their state party congress in Neuss, the Greens also voted to approve the coalition deal, with just two delegates opposed. The Greens’ state parliamentary leader Sylvia Löhrmann acknowledged the risks associated involved in planning to instate a minority government.

“We can’t know whether it lasts for five months or for five years,” she said. “But we’ll try.”

Approval of the current SPD-Greens coalition deal followed weeks of failed overtures that prompted both parties to attempt to form a minority government.