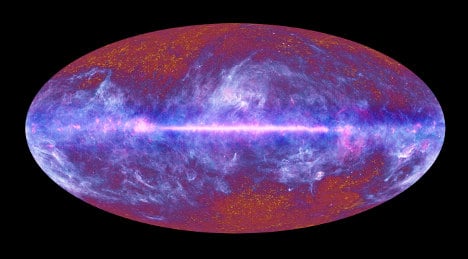 The European Space Agency this week released images taken by its Planck spacecraft, which is in orbit some 1.5 million kilometres from Earth.

They are the first pictures taken by the €600 million space observatory that show the entire sky – made up of our own galaxy the Milky Way and the space around it.

The mission aims to help scientists understand the structure of the universe and confirm – or disprove – their theories about how the universe was born and how it evolved in its infancy. It will also answer questions about how stars and galaxies form.

“This is the moment that Planck was conceived for,” the ESA’s director of science and robotic exploration, David Southwood, said in a statement.

“We’re not giving the answer. We are opening the door to an Eldorado where scientists can seek the nuggets that will lead to deeper understanding of how our Universe came to be and how it works now. The image itself and its remarkable quality is a tribute to the engineers who built and have operated Planck. Now the scientific harvest must begin.”

The bright line across the centre of the image is a side view of the Milky Way, which has a spiral-disc shape. The white and violet cloudy swirls above and below are streamers of cold dust issuing from our galaxy in which new stars are being born.

Planck, named after the Nobel Prize-winning physicist Max Planck, has already identified spots where individual stars are close to forming.

But scientists are most excited about the mottled red, purple and yellow sections at the top and bottom of the image. These colours show cosmic microwave background radiation, the light left over from the Big Bang, when the universe sprang into existence 13.7 billion years ago.

The light pattern is a blueprint for how the universe looked immediately after the Big Bang, when it was just a fiery soup of simple particles, before so much as an atom had formed. It took 300,000 years before this blinding energy cooled enough to start forming matter in the long process of making the stars and galaxies around us.

One big question for ESA scientists is whether the pattern will confirm a key theory, widely accepted among cosmologists, that after the Big Bang, the universe expanded enormously over a short period – a process they call inflation.

If the images bear no trace of this inflation, scientists would have to completely overhaul their theories.

The data is yet to be crunched and meanwhile the Planck observatory, which is fixed in a point in space where the gravities of the sun and earth balance each other out, is continuing to map the universe.

By the end of its mission in 2012, it will have completed four complete scans of the sky. The first release of the complete data is planned for 2012.

“This image is just a glimpse of what Planck will ultimately see,” said Jan Tauber, ESA’s Planck project scientist.