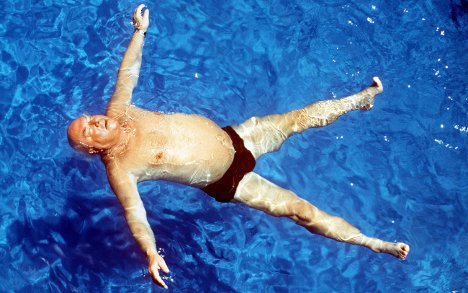 According to a GfK survey published by pharmacist website Apotheken-Umschau this week, tubby German men have few inhibitions when it comes to exposing their extra kilos during the warm summer months.

An overwhelming 81 percent of men polled said they would not let “trifles” such as a beer belly ruin their time at the swimming pool or beach this summer.

Adding to the heady mix of sun, beer and World Cup football this summer are the survey’s findings that a high proportion of German men have “no inhibitions” while wearing revealing swimwear.

Some 79 percent said that it they were “totally indifferent” to what others thought of their less-than-perfect physiques while at the beach or public pool.

German women, according to the study, are slightly more sensitive about their poolside appearance. However, 61 percent of those surveyed have no inhibitions about wearing a swimming costume or bikini. And more than two-thirds of those asked said they paid little attention to what other people think of their bodies.

The GfK market research firm in Nürnberg questioned 1,982 people, including 965 men and 1017 women for the survey.