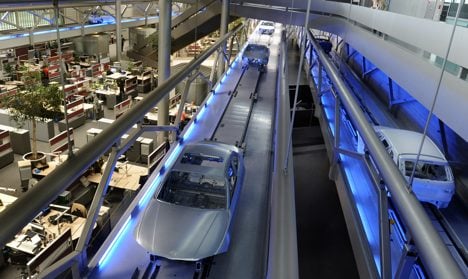 Matthias Wissman, head of the VDA auto association, said the federation foresaw a “normalisation” in the auto industry this year in the aftermath of car-scrapping premiums in many parts of the world. He also pointed to solid performance expected on Asian markets.

In Germany, car sales fell by 32 percent in June to 289,400 vehicles, compared with June 2009 when the scrapping bonus was in effect. In Germany the bonus offer expired in September 2009.

But exports surged by 26 percent last month to 395,000 vehicles, with overall production rising 10 percent, according to the VDA. “Foreign trade is undoubtedly the industrial engine at the moment,” Wissmann said.

“We are seeing international markets pick up much more rapidly than many had expected. The drivers of growth are above all Asian markets,” he added.

Wissmann nonetheless sought to put foreign sales in perspective, recalling that German exports had been particularly weak in mid 2009.

“The current year will be one of normalisation” for auto makers following a surge in 2009 sales thanks to car-scrapping schemes in many parts of the world, he said.

Although car sales have slumped in many European markets, foreign demand has picked up sharply and German auto manufacturers like BMW and Daimler are ramping up production in Germany and the United States.

A spokesman for BMW said the company was in talks with unions to add night shifts and to cut back on summer holidays.

“Exceptionally constructive cooperation” with trade unions also helped car makers make it through the global economic crisis, along with shorter working hours that were partially subsidised by the state, he added.

German new car registrations for 2010 were forecast to fall by about 25 percent to 2.8-2.9 million vehicles, owing to the end in September 2009 of state subsidies for the scrapping of old cars, it added.

Overall output should expand by 10 percent however, and Wissmann noted that “six months ago, no one would have hoped for such a dynamic progression.”

The French data was published just as a scrapping bonus launched to help that country’s sector through the 2009 economic downturn was cut back further.

But Spanish car sales surged 25.6 percent as consumers brought forward purchases ahead of a rise in VAT sales tax of two percentage points on Thursday. That date also marked the end of Spanish cash-for-clunkers subsidies.