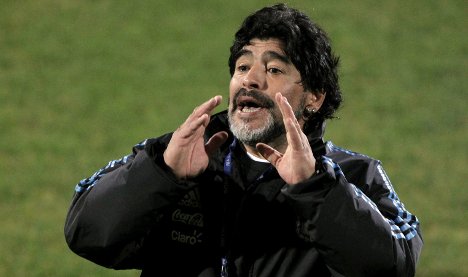 You talking to Schweini? Photo: DPA

The two teams have an intense and long rivalry, with the Argentines beating Germany in the 1986 final before losing to them in the 1990 decider.

More recently, they met at the same stage in 2006 with Jürgen Klinsmann’s side going through 4-2 on penalties after over-cautious counterpart Jose Pekerman left Lionel Messi on the bench.

That shootout ended in a brawl when the South Americans reacted angrily after Germany’s Jens Lehmann saved Esteban Cambiasso’s spot-kick to confirm victory.

The coaches are different now but the desire of both teams to get their hands on the World Cup again hasn’t changed.

“The players are thinking about going onto the pitch, in getting their revenge,” the former midfield maestro told Fox Sports Argentina.

He added that they were confident of countering the current German threat, despite them being high on confidence after crushing old enemy England 4-1 in the round of 16.

“They are stronger (than round of 16 opponent Mexico), but we will field the right players to beat them,” said Maradona, who is seeking to join Franz Beckenbauer as the only man to have skippered and coached a country to World Cup glory.

But Argentina is concerned about star player Messi, who did not train on Thursday. The team insisted he only had a cold and would be fine.

Argentina, along with the Netherlands, are the only countries left with a 100 percent record and Manchester City striker Carlos Tevez said they do not fear Germany, though the team has not failed to reach the last eight since 1938.

“(Germany) won their game and so reached the quarters, but they are not better than Argentina,” he said.

The Germans will have Chancellor Angela Merkel in Green Point Stadium watching and coach Joachim Löw is hoping his young team can impress her by riding the wave of beating England.

“There is a very positive feeling in the team. We have gained a lot of confidence from taking a victory against England,” said Löw.

While Argentina have been unbeatable in South Africa, Löw said he had identified weaknesses, without revealing what they were.

“We have found weaknesses in their side, but I will keep that information for my players,” he said.

Several current players were on the side that beat Argentina in 2006, including midfielder Bastian Schweinsteiger, who remembers it well.

“What I remember most is what happened after the game, this brawl which had been triggered by the Argentines,” he said, then accused the current side of being “disrespectful.”

“I find that the behaviour of the Argentines on the pitch, how they gesticulate and how they try to influence the referee, is disrespectful,” said Schweinsteiger, setting the tone for Saturday’s encounter.

Captain Philipp Lahm added fuel to the fire by saying Germany was looking forward to seeing how Argentina cope with losing again.

We have to focus on the task at hand, we know the Argentines will be a tough game, we need to be cool and it remains to be seen how the South Americans deal with another defeat on Saturday,” he said.

With Messi the fulcrum of an Argentine side that looks unbeatable for pure fire-power and Tevez a live wire capable of scoring from anywhere, Germany have their work cut out for them.

Versatile Lahm will need to be on top of his game, marshalling his defence to snuff out the threat.