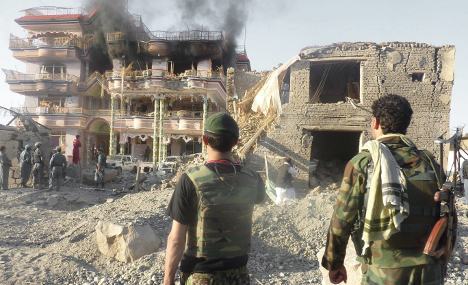 The official, who spoke on condition of anonymity, said another foreign citizen, whose identity was unclear, was shot in the arm during the siege at the offices of Development Alternatives Inc (DAI), in Kunduz city.

“Afghan troops are working to clear the building and medevac the injured,” the official said.

At least three people were killed in the attack on the five-storey building, which began at around 3:45 am (0015 GMT), officials said.

Most expatriates at the compound had fled to the roof as a gun battle raged, he said.

“One expat was shot in the arm on the roof,” he said, adding that he was unsure if the foreigners were targeted as they took refuge or if the shooting was the result of a stray bullet.

The governor of Kunduz province told AFP that at least four suicide bombers attacked the DAI compound, two of whom detonated explosive vests.

DAI is an “implementing partner” of Washington’s international aid arm USAID. It is believed to have opened its Kunduz operation about four months ago.

Such contractors are playing an increasingly important role in Afghanistan, utilising billions of dollars in aid money pouring into the impoverished country in an effort to rebuild after 30 years of war.