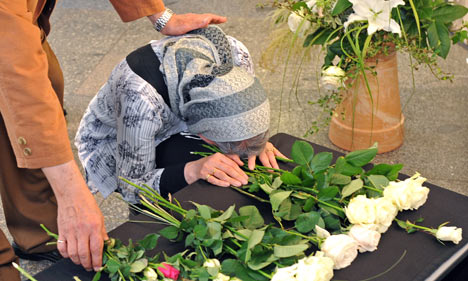 Officials including Saxon Justice Minister Jürgen Martens honoured the memory of 31-year-old Marwa El-Sherbini, dubbed the “veil martyr,” with a plaque to serve as a warning against racism.

“One year ago all of us were forced to realise the deadly logic of the hatred of foreigners,” said Martens, adding that the murder had shaken “Dresden, Germany and the entire world.”

Members of the local Muslim community took part in the ceremony and a commemorative march was held later in the day.

During a trial in July last year, 28-year-old Russian-born Alex Wiens stabbed Sherbini, who wore a headscarf, at least 16 times with an 18-centimetre kitchen knife. She was three-months pregnant with her second child. Her three-year-old son, Mustafa, watched her bleed to death in the courtroom.

Sherbini’s husband, Egyptian geneticist Elwy Okaz, rushed to her aid but was also stabbed and then shot in the leg by a police officer who was unsure who was the attacker.

Wiens said he was acting out of revenge after she had pressed charges against him for calling her a “terrorist,” “Islamist” and “whore” during a dispute over a playground swing in August 2008.

He confessed to the crime during his trial, which resulted in a life sentence.

The murder, as well as the slow reaction of Germany’s politicians and media, sparked outrage in Sherbini’s home country, as well as in the wider Muslim world.

“This deed will not be forgotten,” said Dresden Mayor Helma Orosz.