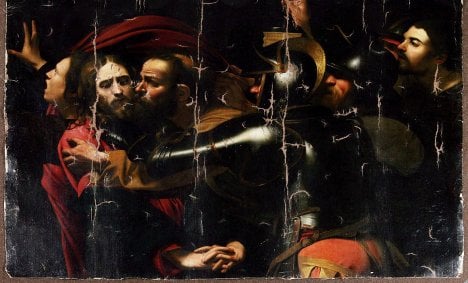 Police announced Monday they had seized the painting, “The Taking of Christ,” last Friday and arrested four suspected members of an international group of art thieves as they tried to sell the 17th century painting in Berlin.

In the joint operation with Ukrainian authorities, another 20 people were arrested in Ukraine. The painting was stolen from a museum in the southern Ukrainian city of Odessa in July 2008.

But now art experts have stepped forward to dispute the Odessa Museum of Western and Eastern Art’s claim that the painting is the original, worth hundreds of millions of euros.

Roberto Contini, curator for Italian and Spanish art for the 16th through 18th centuries at Berlin’s Gemäldegalerie art museum, told daily Der Tagesspiegel he believes it is a “very good contemporary copy” – which is not the same as a forgery.

According to popular expert opinion, the actual original is housed at the National Gallery of Ireland in Dublin, the paper said.

“Forgery would naturally be the wrong term,” a spokeswoman from the Dublin museum told news agency DPA. “Back then copying the work of other masters belonged to the training and refinement of an artist.”

The authenticity of both paintings has been the subject of controversy over the years.

The Dublin version was discovered in 1990 in a Dublin Jesuit monastery, where it had reportedly been since 1930. Up until then, the Odessa version was thought to be the original, Der Tagesspiegel said.

But the Odessa version, also known as “The Judas Kiss,” probably wasn’t painted until about 20 to 25 years after the original in 1602, said Contini, who is preparing for an upcoming Caravaggio exhibition in Berlin.

Despite being a copy, it is “still a historically important piece,” he said, but not worth quite as much as Odessa has claimed.

Unfortunately the work confiscated by Berlin police was heavily damaged, showing wrinkles and lost chips of paint because the thieves folded it, instead of rolling.

According to news agency DPA, German prosecutors were aware they were dealing with a copy, but a spokesperson said on Wednesday this made no difference in their arrests.