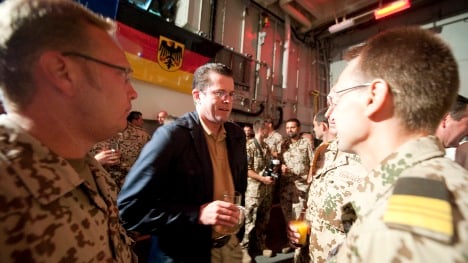 Hellmut Königshaus, an MP for the pro-business Free Democrats who took over as Parliamentary Commissioner for the Armed Forces in May, has made the accusations in his first progress report on the military, according to the daily Financial Times Deutschland.

Königshaus, whose party is the junior member of the coalition government to which Guttenberg belongs, admonished the Defence Ministry, and by implication Guttenberg, for ignoring the gaps already identified in training and equipment.

“Efforts at remedies were not identified,” Königshaus wrote.

The report, covering the first half of 2010, complained of “the inadequate, or sometimes completely lacking, training in firearms.”

The report also specifically accuses the ministry of putting the lives and health of soldiers at risk by providing inadequate numbers of armoured vehicles and having misdirected savings priorities, such as in air travel security, the paper reported.

Indeed, not enough armoured vehicles were made available for soldiers to train for their use, the report said.

The training and equipping of the armed forces came under close scrutiny after seven Bundeswehr soldiers were killed by Taliban insurgents in April, with Guttenberg absorbing much of the flak.

Königshaus also warned in the report that the savings measures being put in place by the government, which will include cuts to the defence budget, could have grave consequences for soldiers.