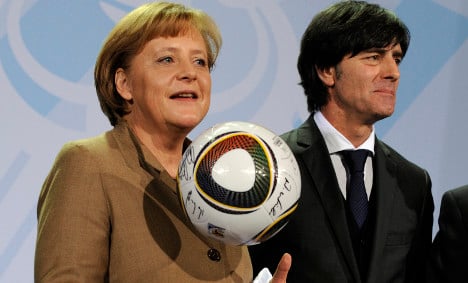 “She will be there. I cannot yet give out the details of her trip but she will definitely be at the match, that’s for sure,” a government spokeswoman said.

Saturday’s showdown, which will have millions glued to television screens from Buenos Aires to Berlin, comes wrapped in tournament history.

The Germans saw off the Albiceleste 3-1 in their first meeting at the 1958 event, ahead of a goalless draw in 1966 on their way to a final loss to England.

Franz Beckenbauer played in that match and had graduated to the dugout when the Argentinians beat his German team 20 years later in a Mexico final that saw Diego Maradona inspire his side to a thrilling 3-2 win.

Four years later and the boot was on the other foot as a tough-tackling Argentina lost in the decider of the 1990 tournament to an Andreas Brehme penalty, leaving Maradona fuming after a bad-tempered showdown.

In 2006, Jürgen Klinsmann’s new-look German side slipped through a quarter-final meeting on penalties after over-cautious counterpart Jose Pekerman elected to leave Lionel Messi on the bench.

With Messi now the fulcrum of a side that looks unbeatable for pure fire-power, Maradona stands three games away from emulating Beckenbauer as the only man to have skippered and then coached a country to World Cup glory.

And el pibe de oro (the golden kid) is now bristling with confidence as he looks to show the world that he is more than just a dugout side-show.

“I feel like pulling on the jersey and playing myself,” Maradona admitted after his charges beat Mexico 3-1 in the round of 16. “They said I had no idea about how to coach, but suddenly I am winning matches and I am still the same guy.”

Amid media speculation that he still does not know his best line-up, Maradona says confidently: “We will send out the best team to showcase our talents against Germany. We know Germany are a different team to Mexico. They are stronger, but we will field the right players to beat them.”

in-form striker Carlos Tevez says the South Americans do not fear Germany despite their three titles and the fact they’ve not failed to reach the last eight since 1938.

“I was more afraid of Mexico – they play better football,” he said. “(Germany) won their game and so reached the quarters, but they are not better than Argentina.”

German striker Miroslav Klose, who helped rip England apart just as Maradona did in 1986, will win his 100th cap for the Germans and is looking forward to boosting his international goal tally, which now stands at 50.

And he begs to differ with Tevez.

“Argentina are a class up from England, but we can hurt them with our tactics and we have to believe in ourselves,” says the 32-year-old, whose opening goal in the 4-1 win over England was his 12th at the World Cup – taking him level with no less than Pele.

Maradona’s men endured a shambolic qualifying campaign, not least when they went down 6-1 in Bolivia.

But after getting through more than 100 players in Maradona’s 19-month tenure, the record books at the finals show only two goals in the ”goals against” column – both consolation strikes, for South Korea in the group and then Mexico.

Ten goals scored in four games tell their own story, while the health of the Argentine attack is demonstrated by the fact that not one was netted by Senor Messi.