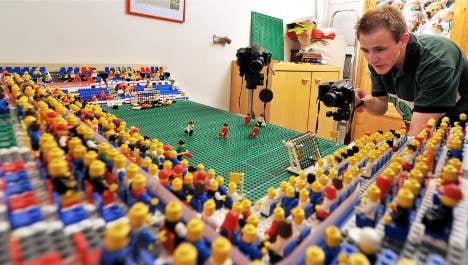 Football can be a serious business, even if it’s played with Lego.

That’s what 19-year-old Fabian Moritz from Laatzen near Hannover discovered after his his stop-motion videos re-enacting this summer’s World Cup matches became a global sensation.

Now his website www.legofussball.eu has a worldwide audience hungry for his painstakingly accurate recreations of the tournament’s goals and other match highlights.

“It was the summer holidays and I was bored,” he told The Local by phone recently. “I built Hannover 96’s stadium out of Lego and I got Real Madrid figures so I just tried it out. The reaction was fantastic and so I continued doing it.”

But his mini football dramas only became famous around the globe after Moritz had the entrepreneurial idea to sell his recreations of World Cup matches to the British newspaper The Guardian and German daily Bild. His Lego recreation of England goalkeeper Robert Green’s horrendous blunder against the United States has since been viewed more than one million times on the Guardian’s website.

Working on the videos in his hobby room is a real labour of love. It takes him between two and three hours to film each goal. He has to take a picture of every single movement that the players and crowd make. His videos are very accurate, they even have the original commentary, and he says that on average it takes about 80 pictures to create one goal, which means about four pictures per second of film. Luckily for him his time-consuming hobby now earns him a bit of money.

But when asked whether he had any plans to expand the commercial aspect of his Lego football enterprise he told The Local: “It’s not really a business. It’s just a hobby which is partly paid and gets some publicity.”

He admitted that some matches are, of course, harder to film than others. In particular, Switzerland’s first round World Cup goal against Spain was “very demanding” because the players were falling all over the place. And if he hadn’t been commissioned to film England versus Algeria, he wouldn’t have made the video because it was such a boring game.

“I had to ask the Guardian for advice as to what to put in the video,” he said.

But the video is actually very well done, especially the detail of the crowd booing the players English players.

Since it takes such a long time and so much effort to film just one goal Moritz has been relieved that there have been relatively few goals during this World Cup.

“On the one hand I am happy, but on the other I would like to see more interesting matches,” he said, referring to the tournament’s goal drought.

His potential earnings have been halved due to England’s hefty defeat at the hands of the German team on Sunday, but at least he can take some solace in the fact that Germany are one step closer to another World Cup title.

Moritz is even planning a longer video for the final, regardless of whether Germany gets that far or not. He says he’s already thinking about the key moment of handing over of the Cup.