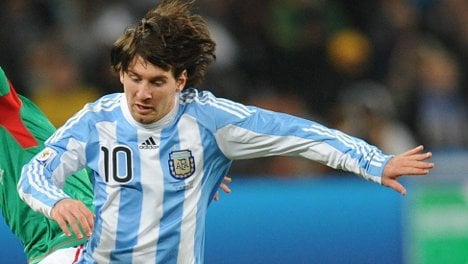 Germany hammered England in Bloemfontein on Sunday with goals by Lukas Podolski, Miroslav Klose and two second-half strikes from midfielder Thomas Mueller in the Round of 16 match to book their last eight berth.

Now they take on Diego Maradona’s Argentina in Cape Town on Saturday and according to midfielder Sami Khedira, the key will be to contain Barcelona’s Messi, the world footballer of the year and Argentina’s talisman.

“Messi is a difficult player to play against, if not the best in the world, there is no way one player can keep him at bay for the full 90 minutes,” he said after Messi helped his side to a 3-1 win over Mexico in the Round of 16.

“It will be a team effort and we may have to put several players on him. Having said that we have nothing to fear and we have a good chance of beating Argentina.”

Veteran German striker Miroslav Klose, who scored his 50th goal on his 99th appearance for the national side against England, said the young side are reaping the rewards from playing as a unit.

“If you look at the two sides, you have to say Argentina look stronger on paper, but the same went for England, they were better known and are more famous than us, but that wasn’t represented on the pitch,” said the 32-year-old.

“We were compact and have proven again that we are a ‘tournament team’ and we can raise our game. “Argentina are a class up from England, but we can hurt them with our tactics and we have to believe in ourselves.”

The game is already being touted as a revenge match for Argentina who lost 4-2 on penalties to Germany at the quarter-final stage four years ago at Berlin’s Olympic Stadium when the Germans hosted the last World Cup.

Klose scored the 80th-minute equaliser to make it 1-1 after 90 minutes, but says he has yet to discuss the game with the squad’s younger players. “Not yet, it is early days, but many players followed the World Cup in Germany,” said Klose.

“We have heard all these comments that Argentina are dying to beat us and see this as a revenge match. But this team should be able to hold their own against Argentina,” he said. “It is hard to compare, I think a whole lot has happened in their team since then. Messi was on the bench in 2006, (Real Madrid’s Gonzalo) Higuain had just come into the team.”

The current Germany team has an average age of just under 25, but Klose

21-year-olds Manuel Neuer and Khedira will only put them in good step.

Germany are bidding to win their fourth World Cup title here and having finished third four years ago, they reached the final at the 2002 World Cup in Korea and Japan where they lost to Brazil in the final.

“In 2002, we had a very mature side, this time we have a really young squad, but I am happy for them as this all adds a wealth of knowledge to their CV,” said the Bayern Munich star.

“They will still be active in eight years time, they can only learn from this.”