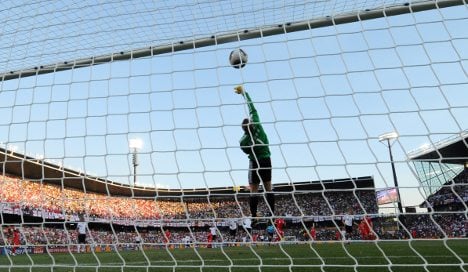 But the disallowed goal by English midfielder Frank Lampard also raised the spectre of the infamous 1996 final in Wembley, when England beat West Germany after another questionable call by the referee.

“Thank you football God,” screamed the headline in sensationalist Bild daily, after Germany had booked its spot in the quarter-finals. “After 44 years, the Wembley goal is finally balanced out. Now the English know how we have felt the whole time.”

The Lampard strike, which replays showed had clearly crossed the goalline, would have evened the match at 2-2. But most German papers had little sympathy for their English rivals.

After Bild wrote its Saturday edition scrupulously avoiding Anglicisms on the eve of the game, the papers allowed their English creativity to flow after the game.

“YES!” exclaimed the tabloid Berliner Kurier. “That was the revenge for Wembley 44 years after the final in London, this time it is England crying over a bad refereeing decision.”

The centre-left Süddeutsche Zeitung offered a simple “Sorry England” and said the Wembley incident, a “thorn in the side of German football,” could now finally be put to rest. But the Munich daily said another football legend would continue to live on: poor English goalkeeping. “The English will only manage to beat Germany when they decide to play with a goalkeeper.”

Berlin’s centrist daily Der Tagesspiegel called the disallowed Lampard goal a “horrible mistake” that could have even cost England the match. “Maybe, probably most likely the game would have turned out differently,” the paper wrote. “The discussion and debate will continue for some time to come.”

Not prone to bouts of national exuberance, the leftist daily Neues Deutschland wrote: “Germany advances to the quarter-finals against Argentina with good passing football – and a little bit of luck.”

And the Bild offered an olive branch to English fans who have sworn for 44 years that Geoff Hurst’s England goal” in 1966 did in fact cross the line by conceding that it was indeed a good decision by the officials after all.

“We admit without doubt that it was definitely a goal. You were robbed. But please, will you now admit as well: the goal at Wembley was NOT a goal. Dear England, let’s bury the hatchet and look forward to massive duels between our two teams in the future.”