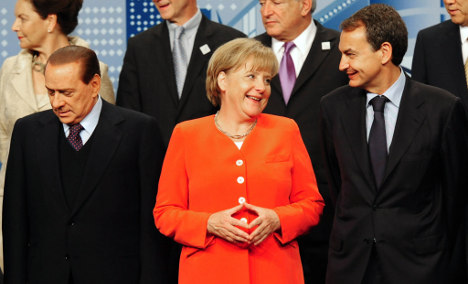 “I am still all excited,” she gushed to reporters. “I can only say to the German team, go on like this – it was great. Today everything went perfectly in the heads and in the legs.”

Germany defeated England in a resounding 4-1 victory, in a match keenly watched by Merkel and her British colleague Prime Minister David Cameron, when the two played hookie from a key summit here to watch the second half.

And on a day that was clearly going her way, Merkel also managed to seal a deal with the leaders of the world’s most industrialized countries to rein in public deficits – a key concern of Europe’s top economy.

G20 leaders agreed to halve public debt by 2013, in a deal which Merkel had sought to put together over initial reluctance of the world’s top economy, the United States.

“It’s more than I expected that the industrialized nations have accepted this is a success,” a clearly pleased Merkel said.

With flushed cheeks she stepped up to the podium for the traditional G20 family photo, just hours after Germany’s World Cup victory and her own personal success at the summit talks.

Berlin had arrived at the talks in the eastern Canadian city of Toronto determined to prove that its ambitious austerity plans would not stifle economic recovery.

Critics had said the more than €80 billion in savings announced by Merkel over the next four years, which mirror similar efforts in other European countries like Britain, would damage growth.

But German officials argued their plans had been misunderstood, explaining that out of the€ 80 billion in cuts, only €10 billion was planned in the first year – small change on a world scale.

“Strong financial policies and a policy to sustain growth are not contradictory for us in Germany,” said Finance Minister Wolfgang Schäuble.

Merkel told US President Barack Obama in a telephone call before the summit talks that Germany’s stimulus spending in 2010 will be more than in other developed countries, accounting for some 2.1 percent of GDP compared with an average of 1.9 percent.

The final G20 document marked a win for Merkel. “We as Europeans can say that our path has found support,” she said, signalling that her budget plans could follow in a few weeks.

But the German leader suffered her own defeat, when she saw proposals for a global bank levy and financial transactions tax kicked out by her G20 counterparts.

However, the warning signs had already been clear early on that many countries were going to block the proposals, and Merkel was clearly not determined to tackle her colleagues more on the subject for the time being.