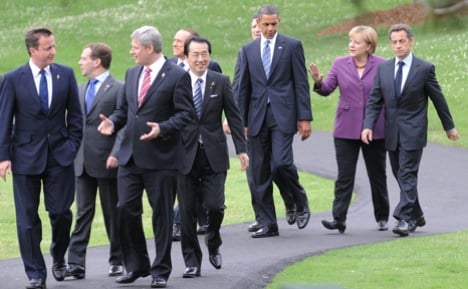 “I have made it clear that we need sustainable growth and that growth and intelligent austerity measures don’t have to be contradictions,” Merkel told journalists. “The discussion was not controversial, there was a lot of mutual understanding.”

The United States has expressed concern over European moves, led by Germany, to rein in spending in face of ballooning deficits. Instead, Washington has argued for continued measures to spur economic growth.

But Merkel said: “The US didn’t try to emphasize the differences. We all stated that we feel responsible for modern and sustainable growth. We have made our point clear that Germany intends to continue its course.”

French Finance Minister Christine Lagarde told the BBC that there was “no difference, no crack” between France and Germany over how to deal with the financial crisis.

“We’re both driven by the two-fold objective to maintain growth and of cutting deficit and debts, and this is our joint commitment,” she said.

Asked whether Germany was doing enough in the crisis, she said, “Germany is doing everything it can at the moment. We can all do more and some can do more in cutting deficits and debts, some can do a little bit more in spending and consuming.”

Merkel, head of Europe’s largest economy, has led moves to slash spending after the eurozone debt crisis forced Berlin to stump up the lion’s share of cash for an unprecedented rescue mechanism.

Critics have said that the more than €80 billion in savings announced by Merkel over the next four years, which mirror similar efforts in other European countries such as Britain, will hit growth.