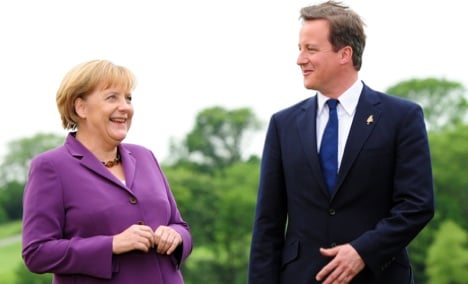 British Prime Minister David Cameron and German Chancellor Angela Merkel want to talk about tuning in to Sunday’s last 16 clash – and Cameron has joked he will “try not to wrestle her to the ground during penalties.”

The last time England and Germany met in the World Cup was the 1990 semi-final when England were beaten on penalties and which has become one of the most famous games in English footballing folklore.

“There is an idea we might try and watch it together,” Cameron told ITV News in Huntsville, Canada, where he was attending a Group of Eight leaders’ summit. “I will try not to wrestle her to the ground during penalties, but we will have to see.”

Merkel told reporters: “I’m going to watch the game on Sunday. I’m going to talk to Cameron – who, when, where and how.”

“I commiserated with Prime Minister Berlusconi about the Italian team, but he is now claiming (the Italian manager of England) Fabio Capello as one of his own, and is going to be supporting England, so I have notched up one supporter,” he told Sky News television.

Asked to predict the result, he said: “I just want an England win. One (goal) is enough.”

There is huge interest in the World Cup at the summit among football-playing nations, with delegations following it keenly and some televisions at the Deerhurst Resort, where it is being held, tuned in to live action.