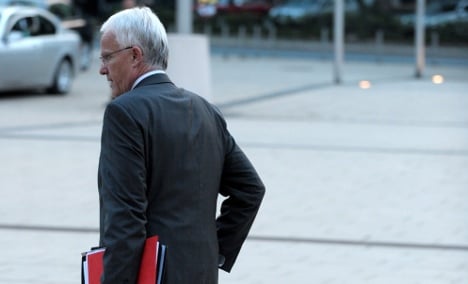 “I’m no longer striving for an office,” he said at a private meeting for the Christian Democrats (CDU) in Essen, according to a party spokesperson.

Since the CDU’s bruising defeat in the May 9 election, which robbed Chancellor Angela Merkel’s centre-right coalition of its majority in the upper house of parliament, politicians in North Rhine-Westphalia (NRW) have been scrambling to form a coalition.

Last week the centre-left Social Democrats (SPD) and Greens finally decided to form a minority government. Rüttgers, who had tried to form a so-called “grand coalition” with the SPD, said then that he would not stand against their state party leader Hannelore Kraft for election to premier.

But on Thursday the 58-year-old also said that even if there are new elections in the country’s most populous state, he will not run again for his party’s top position. According to the party spokesperson, his decision was unanimously welcomed.

His decision to stay until 2011 is reportedly meant to help smooth the transition to an opposition government.

Rüttgers has headed the NRW state CDU group since 1999, and began serving as state premier in 2005.

The SPD and Greens are scheduled to meet for their second round of coalition talks on Friday in Düsseldorf. SPD leader Kraft is expected to elected to state premier in July.