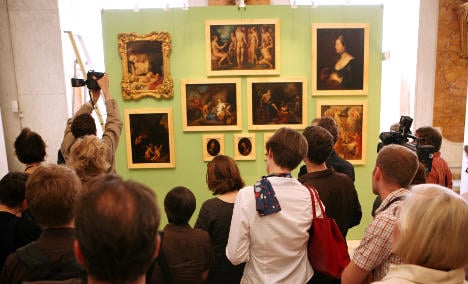 The paintings, which include a “Maria lactans” (1614) from Peter Paul Rubens’s studio, were spirited away from the Sanssouci palace in Potsdam during World War II. After 1945 the works vanished – until this year.

“A young man arrived in March, opened the boot of his car, took out four paintings and put them on my table,” an amazed Samuel Wittwer from the Prussian Palaces and Gardens Foundations said.

It turned out that the paintings, of which there were 10, came into the possession of the man’s great aunt after the war, who gave them to her sister for safekeeping.

The works were part of an impressive collection amassed by Frederick the Great (1740-1786) that included works by Caravaggio and Van Dyck. Many were taken by the Red Army to the Soviet Union as war booty.

Most were returned in the late 1950s but many still remain missing, and some are thought to be in people’s attics in Germany. Wittwer hopes the return of the 10 works to Sanssouci will inspire others to follow suit.

There is no risk of criminal proceedings, he promised.

“We know that individuals in Germany have some works … We will even accept fragments, left by the door in a bag.”