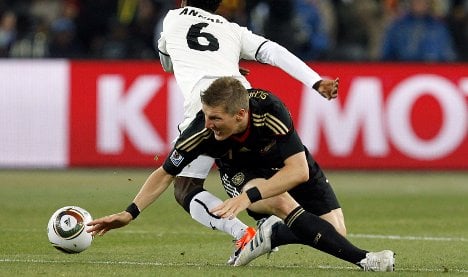 Midfielder Schweinsteiger limped off with a hamstring injury in the 81st minute of Germany’s 1-0 win over Ghana on Wednesday night which booked their place in the last 16 where they will face England in Bloemfontein on Sunday.

Defender Boateng came with a calf strain in the 73rd minute, but Germany’s assistant coach Hansi Flick said the pair are receiving intensive treatment and there is optimism they will be fit to face Fabio Capello’s side.

“Jerome has a calf strain while Schweinsteiger has a hamstring strain, it might be difficult for them to be in the starting line-up,” said Flick at the German team base on Thursday. “We are relatively optimistic Bastian will be fit. The team doctor says the recovery time is relatively short, so we are hopeful he will be able to be fit, because he has become a key player for us.”

Midfielder Mesut Özil, the man-of-the-match against Ghana whose 60th-minute right-footed strike from the edge of the area sealed the win, is expected to be fit for Sunday despite spraining an ankle towards the end of the Ghana match.

“He twisted his ankle, but he doesn’t have any pain and there should be no problem with him being fit for Sunday,” said Flick.

“This is a classic game of football, but unfortunately it has come too early in the competition. It is worthy of a semi-final, but not a last 16 game,” Beckenbauer wrote in his column for German daily Bild.

“You need to respect this team but not fear them because they were poor during their first two matches of this World Cup. Although they did improve against Slovenia,” added Beckenbauer after England made sure of their last 16 berth with a 1-0 win over the Slovenians on Wednesday.

According to Beckenbauer, Germany will have an advantage over England in terms of fitness when the sides meet in Bloemfontein.

“The English seem tired and there’s a reason for this: the Premier League players compete in more matches than their colleagues from the Bundesliga, excluding the FA and League Cups,” he wrote.

“That is why they often arrive jaded at a World Cup or a Euro … while our players give the impression of being in better physical condition.”

Beckenbauer captained Germany to the 1974 title and then coached the team which won Italia 1990. He was in the Germany side which lost 4-2 to England in the 1966 World Cup final when Geoff Hurst scored his famous hat-trick and he coached the side in Turin when Germany beat England on penalties at the 1990 World Cup semi-final.

At the beginning of the tournament, Beckenbauer rekindled the rivalry between the two European giants by criticising England’s style of play under Three Lions coach Capello.

The latest World Cup clash between Germany and England is merely the latest chapter in a storied rivalry between two of the game’s international giants.

Here is a selection of some of the classic matches between three-times World Cup winners Germany and England, who have been crowned world champions once.

England beat West Germany 4-2 to lift the World Cup on home turf with a hat-trick from Geoff Hurst, the only one ever scored in a World Cup final. West Germany, trailing 2-1, silenced the expectant Wembley crowd with an equaliser in the dying seconds of normal time, with Wolfgang Weber slamming home to take the final into extra time for the first time. The moment of controversy that forever defined the match came in the 101st minute when Hurst’s shot beat goalkeeper Hans Tilkowski and bounced down off the underside of the bar. Linesman Tofik Bakhramov of Azerbaijan famously gave the goal and Hurst went on to complete his hat-trick as England lifted the trophy for the first and only time.

Defending champions England were leading 2-0 in the World Cup quarter-finals in Mexico through goals from Alan Mullery and Martin Peters before second-half strikes from Franz Beckenbauer and Uwe Seeler brought West Germany level. The hero of 1966, Geoff Hurst, scorer of the controversial goal against West Germany in the final four years earlier, then had an effort disallowed before a match-winning volley from the legendary Gerd Müller in extra time. England would bemoan the absence of goalkeeper Gordon Banks, taken ill beforehand, for falling to their first competitive defeat against the Germans.

The old rivals met in the World Cup semi-finals in Turin after differing paths to the last four. West Germany comfortably topped their group before brushing aside then European champions Netherlands but an unconvincing England came into the match on the back of an ill-deserved extra-time victory over Cameroon. At half-time, the match was goalless but on 60 minutes Andreas Brehme’s drilled free-kick took a huge deflection off Paul Parker and looped over the despairing Peter Shilton. But with 10 minutes of normal time remaining Lineker smashed home his fourth goal of the finals. The match could have gone either way in extra time, with both sides hitting the woodwork, but penalties beckoned and West Germany held their nerve, with England’s Stuart Pearce first to crack, followed by Chris Waddle. Germany went on to beat Argentina in the final.

Playing at home in the semi-finals of the European championships, England took an early lead against eventual champions Germany through Alan Shearer but Stefan Kuntz responded. Paul Gascoigne came agonisingly close to winning it for England in extra time before Gareth Southgate joined the growing list of Englishmen to fail in shoot-outs, as the host nation crashed out.

England, paired with Germany in the World Cup qualifiers, had lost 1-0 to Germany at Wembley a year earlier and fell behind to Carsten Jancker’s goal after just six minutes. Michael Owen netted England’s equaliser but that gave no indication of the drama to come. Just before half-time Steven Gerrard scored, with Owen completing a hat-trick in the second half and Emile Heskey adding a fifth to complete a rout for Sven-Goran Eriksson’s men in front of the stunned Germany fans.