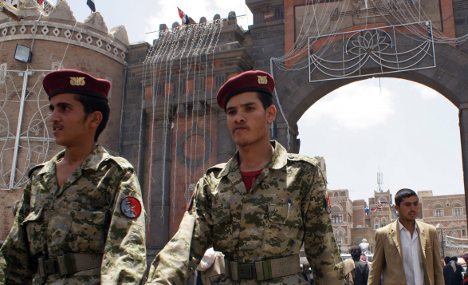 “The criminal prosecution dealing with terrorism affairs began interrogating the four suspects in connection with the assassination attempt on the British ambassador, who include a German, Iraqi and two Yemenis,” the website said.

It quoted its sources as saying that the German suspect is the son of a German businessman married to a Yemeni and has been living in Yemen, but did not provide details of the other suspects.

British envoy Timothy Torlot narrowly escaped an April 26 bomb triggered by a suicide attacker who hurled himself at the ambassador’s two-car convoy in a Sanaa street as it neared the British embassy compound.

Al-Qaeda in the Arabian Peninsula (AQAP) claimed responsibility for the attack in a statement posted on May 12 on jihadist forums, according to the US monitoring group SITE.

The group identified the bomber as Othman Nouman al-Salawi – confirming the identification given by Yemeni police – and provided his picture, SITE said.

The four suspects are part of a group that plotted to attack vital facilities and interests, the judicial sources said.

Yemeni authorities claimed most of the group’s members had been arrested.

Yemen is the ancestral home of Osama bin Laden and AQAP’s home base.