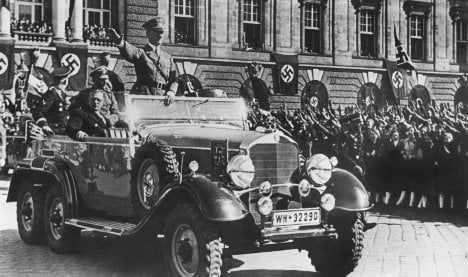 No, it wasn't THIS car. Photo: DPA

The letter, excerpts from which were published in the Bild daily Wednesday, dates from September 1924, when Hitler was languishing in Landsberg prison after the abortive Munich beer hall putsch.

He said he needed the dealer to knock “a couple of thousand marks” off the price of the grey 11/40 Benz (later Mercedes-Benz) model he was interested in, as he was waiting for the proceeds from his book “Mein Kampf.”

“The difficulty for me is that … I cannot expect big proceeds from my works before the middle of December so I am forced to find an advance or a loan from somewhere,” wrote Hitler. “Of course, a few thousand marks would play a very big role in this.”

The Behringer auction house in Fürth, southern Germany, said on its website that it was selling the letter, along with more than 500 “paper objects” from Hitler’s spell in prison, on July 2-3.

Other items in the lot include a list of visitors Hitler received and the prison records showing his arrival. The minimum bid has been set at €25,000 for the whole lot.