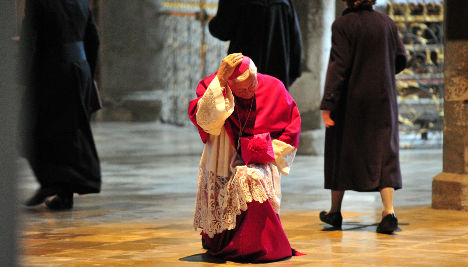 Just one week ago, a defiant Mixa insisted he had been pressured to resign over claims he beat children in a Catholic orphanage in the 1970s and 1980s, and vowed to take his case to the Vatican.

But on Wednesday he issued a joint statement with his former Augsburg diocese, announcing he was resigning for good. He recanted the claim he had been forced out by the head of Bavaria’s Catholic bishops, Archbishop Reinhard Marx, and the country’s top Archbishop, Robert Zollitsch.

“Former Bishop Mixa is no longer calling into question his resignation,” the statement said.

According to daily Bild, Mixa wrote in a separate, personal explanation: “I have in many respects been blameworthy.”

The beleaguered Mixa has been dogged for months by allegations that he beat children while he was head of the Schrobenhausen children’s home in Bavaria – allegations that forced him to resign in April.

Last week, he claimed he had been forced to resign and vowed to have his case reviewed by the Vatican. He also moved back into his old quarters at the Augsburg bishop’s palace, apparently because he had nowhere else to stay.

This was followed by media reports of a secret Church dossier that detailed Mixa’s alleged alcohol abuse and sexual assaults on young priests.

It said Mixa would still accept “the invitation by the Holy Father for a conversation in Rome” but stressed that “his resignation and its circumstances is hereby no longer in question.”

Crucially, it also stated that “former Bishop Mixa holds no one responsible, and reproaches no one, for the pressure which he felt in signing his resignation.”

Mixa would address the faithful of the Augsburg diocese in a personal letter, it added.