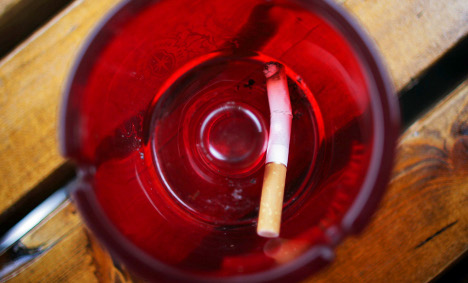 There has been an increase in the proportion of casual smokers who support the ban as well, the organisation said at the launch of the report in Berlin on Tuesday. That figure rose from 53 percent in 2007 to 69 percent in 2010.

Among the more than 2,000 people over the age of 16 surveyed in February, a whopping 74 percent welcomed a total ban on smoking in restaurants – up from 53 percent in 2005.

Measurements by DKFZ have shown that air quality in restaurants and bars has improved dramatically since the introduction of the law against smoking, the organisation said. Between 2005 and 2009 the concentration of lung-penetrating airborne tobacco smoke particles in public establishments has gone down by 80 percent.

But DKFZ cancer prevention director Martina Pötschke-Langer said current measures to protect non-smokers are inconsistent. Non-smoking areas in establishments which still allow smoking – thanks to loopholes in the ban – are four times more polluted with smoke than places where smoking is not permitted at all. In some cases the concentration of smoke in non-smoking areas is, in fact, higher than in smoking areas due to air circulation, she said.

Pötschke-Langer demanded a comprehensive nationwide smoking ban. Most German states had introduced such a ban by January 1, 2008.

The restrictions have, however, been widely flouted and legal exceptions in many states have served to weaken the law. But Pötschke-Langer insisted that the health of non-smokers and employees cannot be ignored by “fickle” national legislators.

According to the study, entitled “The smoking ban works,” the law has done more than just clear the air in bars and restaurants. Of 1,000 smokers, some 14 percent said they had quit between 2007 and 2009, and one-fifth of those named the smoking ban as the reason.

Meanwhile the number of smokers with a smoke-free homes has risen from 30 percent to 41 percent over the same time period. And smoke-free households with children younger than 5 rose from 54 to 69 percent.