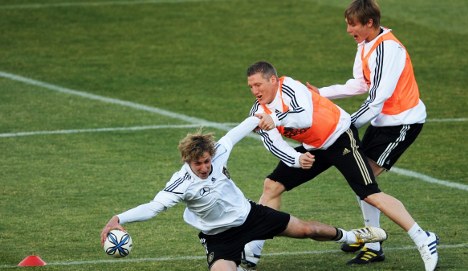 The German team warms up with some rugby. Photo: DPA

The Germans need to get their campaign back on track after their shock defeat to Serbia. A loss to Ghana would mean they fail to qualify from the World Cup’s group stage for the first time in their history.

Löw’s side got off to the ideal start when they hammmered Australia 4-0 in their opening game, but after striker Miroslav Klose was sent off, the Serbs brought them down to earth with a 1-0 defeat.

Klose, the top scorer at the 2006 World Cup, is suspended for the Ghana

clash at Johannesburg’s Soccer City, which will decide the winner of Group D. Only a win will guarantee the Germans a place in the Round of 16.

Brazilian-born striker Cacau is likely to replace Klose, Löw said. Löw said it was his “tendency” to start Cacau over Mario Gomez or Stefan Kiessling in the pivotal showdown.

“Right now I have a tendency that Cacau can play from the beginning but Gomez and Stefan Kiessling have also shown commitment and could be there from the start,” Löw said.

“I could change positions. The last training is very important. After a defeat you consider all the possibilities. Right now, I have a tendency toward Cacau.”

Löw said he expected a tough, physical encounter against Africa’s Black Stars, who are undefeated in Group D after a draw with Australia and a win over Serbia.

“Ghana are fast and can play well on the counter, they don’t shy away from one-to-one duels as they are strong, they have players who can put in fantastic sprints,” said the 50-year-old.

“The general tempo against Ghana will be higher than Serbia, the Serbs were a bit slow out of the blocks and they had a draw in mind with only one forward. It will be quicker, but fitness is written with a capital ‘F’ in the Germany squad and we can cope with it.”

Löw also lashed out at what he called a flurry of quickly whistled yellow cards. Five Germans have received yellow cards and would miss Germany’s first knockout match if they are booked again and the team advances.

“I have, of course, after the game against Serbia, reminded my team what it means going into tackles, that a yellow or red card can happen,” Löw said.

At the same time, Löw cannot afford to have his players hold back against a Ghana squad which he notes loves to play a physical, tough-tackling game.

“We have to be careful to remind our players not to be too reserved. This could be an advantage for Ghana,” Löw said. “They like to prove themselves in tackles. It will be a physical game.”

Löw says his young squad has not shown diminished confidence after the shock loss to Serbia.

“We have worked. We have focused. We have prepared for Ghana. They do not

give me the impression they are nervous,” Löw said. “Although it is young, the team has the confidence and inner conviction we can win against Ghana.

“We know Ghana might be Africa’s last hope in the tournament. Ghana has a team that is highly motivated. We believe our team can handle the pressure.”

Germany manager Oliver Bierhoff has already said there will be no vendetta against Ghana midfielder Kevin-Prince Boateng, whose scything tackle on Michael Ballack in the FA Cup final ruled the German skipper out of the World Cup.

Boateng, who is a key midfielder for Ghana, has apologised repeatedly to Ballack, but his half-brother Jerome, who is in the Germany squad but is unlikely to play, still refuses to speak to him over the incident.

“It was all I could do (to apologise),” said Kevin-Prince. “I was late with the tackle. I apologised twice while he was still receiving treatment on the pitch, this is the third time.”

Jerome has called for calmer minds to prevail, though he still has no intention of talking to his half-brother.

“He remains my brother and I wish him the best, but at the moment we have nothing to say to each other. That happens in other families as well,” said 21-year-old Jerome, who is set to make his English Premier League debut next

Ghana captain John Mensah said Germany would be feeling under intense pressure after the defeat to the Serbs.

“I don’t think there is pressure on us,” he said. “They will probably have more pressure because they are favourites.

“We all know Germany has a good team, but we believe we have a good team as

well. We have to keep things tight, stay compact and I’m sure we can win the