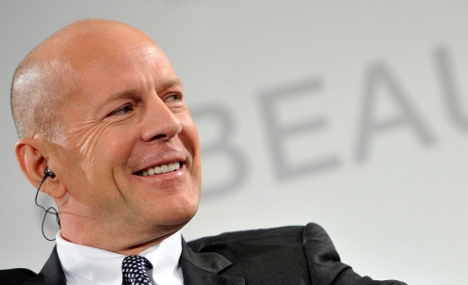 The 55-year-old was in the city promoting his new fragrance “Bruce Willis.” He stayed just one night at the exclusive 326-square-metre Presidential Suite at the five-star Villa Kennedy hotel with his wife, spokeswoman Siria Nielsen said.

The hotel’s website revealed that the suite features a walk-in rain forest shower.

Though short, the steamy stay at the central Frankfurt hotel was likely a memorable one thanks to what Nielsen said is a “very sensitive” fire alarm system.

“But the hotel did not have to be evacuated and Mr. Willis reacted with good humour,” she added.

“We determined the alarm had been triggered by steam in the bathroom and was therefore a false alarm,” he told The Local, adding that the windows had already been opened to clear out the tropical humidity.

“There was no one in the shower any more when we arrived,” he said. “We only found out later from the maids who was staying in the room. But we had assumed it was someone famous because there was so much security staff around.”

The actor will not have to pay for the fire department operation, hotel spokeswoman Nielsen said.