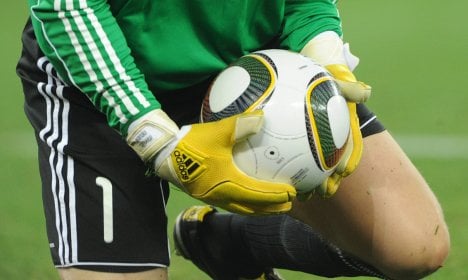 The company forecast sales of at least €1.5 billion ($1.9 billion) from balls, jerseys, boots and other items, revising a previous estimate of more than €1.3 billion upwards.

Adidas sponsors 12 of the 32 World Cup teams, including Argentina, France, Germany and Spain in addition to hosts South Africa.

“The jerseys are doing much better than expected,” Adidas boss Herbert Hainer told a press conference at the group’s headquarters in Herzogenaurach, Bavaria.

More than one million Argentinian, German, Mexican and South African jerseys have been sold already, he said. During the 2006 World Cup, it sold three million jerseys, and Adidas sees six of its teams making it past the first round of competition, which will wind up this week.

The group also manufactures the controversial Jabulani football being used in the competition, of which it has forecast sales of 13 million. Markus Baumann, who oversees football activities at Adidas, said the Jabulani ball was the best selling item so far.

In addition to balls and jerseys, of which Adidas expects to deliver 6.5 million, the company is banking on brisk sales of boots.

Argentinian superstar Lionel Messi is under contract, while US rival Nike has signed deals with Portugal’s Cristiano Ronaldo and England’s Wayne Rooney.

Teams are only bound to wear the sponsor’s official uniform, with each player allowed to choose his own boots.

Drawing on its experience with the 2006 World Cup, Adidas has geared up to deliver more jerseys of teams that make it to the next round unexpectedly.

Paraguay is one example, while Hainer said that France, which might be eliminated this week, did not give “a very positive image,” with scenes of angry confrontations being streamed around the world.

Adidas and its US rival Nike both claim the top spot among makers of kit related to football, one of the most-played sports worldwide.

Nike sponsors Brazil, Portugal, the United States and with its Umbro brand, Britain, among its total of 10.

Puma, the German group that is number three among World Cup team sponsors, has Italy and four African clubs under its colours, among its total of seven.

For the group as a whole, full-year forecasts now look fairly conservative, especially since Hainer noted that other areas were also performing well. For now, Adidas expects sales to gain five to six percent from last year’s level of €10.4 billion.