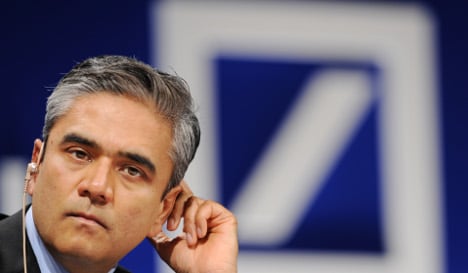 Jain, 47, has just been appointed sole head of the German lender’s most powerful division, its corporate and investment banking division, which accounts for the lion’s share of group revenues and profits.

Previously Jain, who until recently owned a stake in the Mumbai Indians, the all-star Indian Premier League cricket team owned by the super-rich Mukesh Ambani, ran the division in tandem with Michael Cohrs, who is retiring.

Armed with a degree from Delhi University and an MBA in finance from University of Massachusetts Amherst, Jain first cut his teeth at Merrill Lynch in New York before moving to his present employer in London in 1995.

And despite running a division that earned its crust using the kind of opaque investment bets that brought the global financial system close to collapse in 2008, Jain is generally seen as having had a “good” crisis.

He is credited with having managed rapidly to re-organise his division post-crisis and get it back to making money. In the first quarter of 2010, it generated €2.7 billion ($3.3 billion) in pre-tax profits.

Since 2002 he has been on the bank’s executive committee and since April 2009 a member of the management board, earning an estimated €9.7 million last year, €200,000 more than the man he might succeed, Josef Ackermann.

But Deutsche Bank is no ordinary bank, and being selected to fill the Swiss Ackermann’s shoes will not be easy. And a strong candidate from outside the bank, which employs 77,000 people worldwide, may yet emerge.

For one thing, Germany’s biggest bank also has significant private and retail banking operations, not least in Germany, areas which are being expanded via acquisitions and which the investment banker Jain would also have to run.

More importantly, though, the position of Deutsche Bank boss is a highly visible one in Germany, a high-profile job that requires its holder to hobnob with politicians and business leaders.

Ackermann, 62, is perhaps one of Germany’s best-known chief executives, dining with Chancellor Angela Merkel and appearing on television chat shows.

Fluent German is indispensable and Jain’s is thought to be weak at best.

“The extent to which Mr. Jain is able and willing to perform this role is a question mark,” Becker said.

“His Indian origins are an issue. It wouldn’t be a problem with Deutsche Bank’s customers or with employees … The problem might be with the German public.”