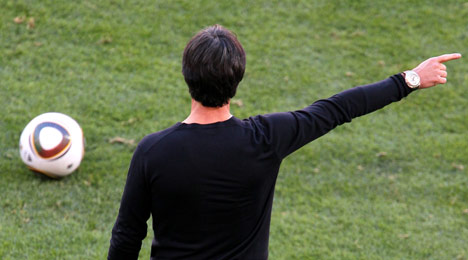 Having hammered Australia 4-0 in their opening match, Germany were brought crashing down to earth on Friday when Milan Jovanovic’s first-half goal gave the Serbians a 1-0 win to throw Group D wide open.

Just a minute before Serbia scored, striker Miroslav Klose was sent off for a second yellow card and Lukas Podolski later saw his second-half penalty saved during Germany’s first group-stage defeat at a World Cup since 1986.

But despite the set-back, Löw said he was confident his side would beat Ghana at Johannesburg’s Soccer City on Wednesday and reach the knock-out phase.

“I don’t think such a defeat will send us into headless-chicken mode,” said

Löw. Germany, Ghana and Serbia are all on three points in Group D ahead of

“Despite all the disappointment of last night, I woke up with a good gut feeling because in the second half, we showed great morale and the team created some good goal-scoring opportunities,” he said.

“We can take some confidence: we played with our heads up, there is a mood of defiance in the air and everyone is sure we can reach the last 16. Germany has the will-power, the skills and the belief to put a defeat like this behind us, there is no resignation in the camp or self-doubt.”

With Klose suspended for the next game, Löw will be forced to replace his striker and Brazil-born Cacau is favourite to start.

Löw has five players on yellow cards and a further booking for any of them against Ghana would see them miss the Last 16 game, should Germany progress, but the coach said he would not be telling his players to hold back.

“We have a few players who are on a yellow as far as the next game is concerned, but I will not tell the squad to keep their cards close to their chest or to play with the handbrake on,” said Löw.

“I will not tell them to hold back mentally, I want them to apply the right level of positive aggression. There may be a risk of players picking up a ban, but that must not be an excuse to hold back. Attack is an important part of our game.”

In the match with Serbia, Spanish referee Alberto Undiano dished out nine yellow cards and Löw was unpleasantly surprised by the number of bookings.

“I was surprised, in a negative way, about the amount of yellow cards,” said the 50-year-old whose side received five yellow cards, as well as Klose’s red.

“It goes without saying that brutal tackles need to be given a yellow or even a red card, but such silly fouls shouldn’t be punished.”

But Löw said the match was in no way an unfair game and the number of yellow cards was unwarranted.

“Klose could have jockeyed the guy, he knew he was in dangerous territory after the earlier booking, but Klose is not an unfair player, all he wanted to do was get the ball.”