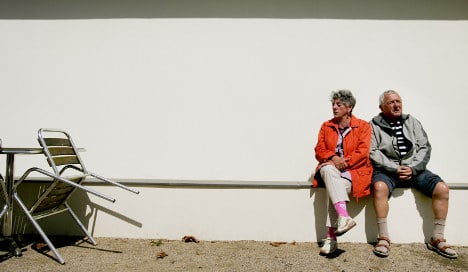 A pill might make him capable but won't make her want to. Photo: DPA

Flibanserin, developed by Rhineland pharma company Boehringer Ingelheim, had been aimed at post-menopausal women dissatisfied with their libido, which often declines later in life.

The candidate-drug was inevitably labelled a ‘female Viagra’ although it was designed to tackle desire rather than ability.

But the company’s application for marketing license in the US was rejected on Friday night after the FDA advisory panel voted unanimously against approval.

“The efficacy was not sufficiently robust to justify the risks,” said panel chair Julia Johnson, chief of obstetrics and gynecology at the University of Massachusetts Medical School, after the committee’s deliberations.

The FDA usually follows these panels’ advice, even though it is not required to do so by law.

Flibanserin – which Boehringer Ingelheim intended to market under the name Girosa – has not been approved for sale anywhere in the world.

Although treatments for male sexual dysfunction such as Viagra, Cialis and Levitra, have generated enormous sales since Viagra was launched in 1998, no success has been achieved with a counterpart aimed at women.

Several studies, including one published in the influential New England Journal of Medicine, have suggested that at least 40 percent of women suffer from varying degrees of sexual hypoactivity – lack of sexual activity.

Critics warn that a number of such studies have been financed or even conducted by pharma companies, while many would argue that a lack of sexual desire should not be medicalised at all.

“Neither study met the agreed-upon criteria for success in establishing the efficacy of flibanserin for the treatment of HSDD” (Hypoactive Sexual Desire Disorder), the report said.

The two-year studies, measured by women’s diary entries in the United States and Canada, found that women who took flibanserin reported an average 4.5 more satisfying sexual experiences per month, versus 3.7 for those who took a placebo.

The women – most of them married with a high education and good health apart from their decreased libido – had reported an average 2.8 satisfying experiences a month before taking the medicine.

According to the studies cited by FDA, flibanserin can also cause side effects such as depression or dizziness.

Flibanserin belongs to a family of anti-depressants that reduce the level of serotonin, which has an effect on mood and can put a damper on sexual desire.

The drug also controls the levels of dopamine and norepinephrine in the blood, substances that act on sexual desire, Boehringer Ingelheim said.