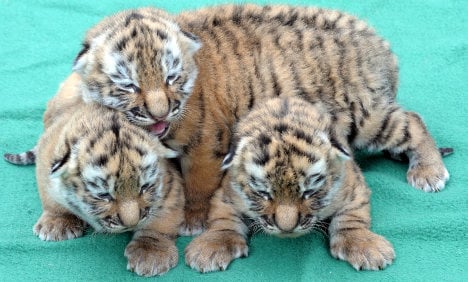 In May 2008. the men put the cubs to sleep directly after their birth because their father had not been 100 percent Siberian tiger as they initially thought.

Though none of the zoo workers will actually serve any time, should there be a new offence the zoo director must pay an €8,100 fine, the court said.

The employees defended their decision as a practical measure, saying the mongrel tigers were worthless, could not be used for breeding and would have taken up valuable space at the Magdeburg Zoo from pure-blooded animals. They said they had no other alternative because other zoos were not interested in taking on the baby big cats.

But the judge at the district court found the four guilty, saying there were “no sufficient reasons to kill less valuable, but totally healthy animals.”

Animal rights organisations filed charges after the incident more than two years ago.

The case is one of several in recent years in which Germany’s zoos have butted heads with animal rights groups over the treatment of young animals.

The Berlin Zoo’s polar bear cub Knut became a star in 2006 after an animal rights activist called for him to be euthanised because his mother had rejected him. Instead the zoo made the controversial decision to raise Knut was by hand, as did the Nuremberg Zoo when their polar bear cub Snowflake was born in 2008, despite picketing from animal rights protesters at her media debut.

And in March 2008, Berlin Zoo director Bernhard Blaszkiewitz admitted to being involved in the deaths of four wild cats when he headed the zoo’s Tierpark facilities on the eastern outskirts of Berlin in 1991. Blaszkiewitz’s admission came after allegations that hundreds of animals had disappeared from the zoo under dubious circumstances.