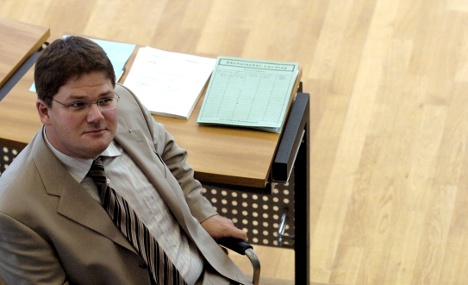 The politician will now be barred from attending the next ten plenary sessions and committee meetings due to the “particular gravity of the rebuke,” parliamentary president Matthias Rößler said. This means he will only be able to attend one session in December before the end of the year.

The executive committee interrupted the floor debate to hold a special meeting about Apfel’s comments, which were given under the context of an NPD motion entitled “No cooperation with rogue states – end the Saxon-Israeli partnership.”

The neo-Nazi garnered several calls to order with references to the “Jewish rogue state,” the “blooming Holocaust industry” and the “Jewish terror state” until his microphone was finally turned off.

Rößler called an end to the debate, but Apfel refused to leave the plenum, forcing police to escort him from the building.

The parliamentary leadership had already distanced itself from the debate ahead of time, encouraging the NPD to change the title for fear that the topic would damage Saxony’s reputation.