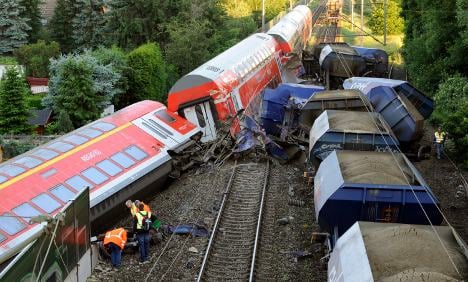 An oncoming regional passenger train at around 11:20 pm rammed into three cars of a freight train, which had derailed just ahead of a bridge in the city of Peine.

The impact of the crash kicked the regional train engine and two passenger cars off its side of the tracks, a police spokesperson said. The rail cars broke through a fence and landed in the garden of a family home along the tracks, destroying a child’s play house.

A passenger alarmed police from the train, which was carrying 65 people. The regional train conductor was severely injured, while 15 passengers sustained minor injuries, police said. The driver of the freight train, which was laden with gravel, walked away unscathed, according to initial reports.

“It all happened really fast,” 27-year-old passenger Florian Ristau told news agency DDP. “First the train braked, then there was a strong jerk and the train tipped over.”

Passengers were unsure whether they should stay inside the train or not, but someone used the emergency hammer to break out a window, he said.

“The whole house wobbled, then there was a flash on the aerial line, and then it was still,” nearby residents Werner Meding told DDP, adding that the next thing his family heard was calls for help from one of the train conductors.

According to police spokesperson Paul-Gerhard Deppe, the regional train had not been travelling very fast due to slowing through several construction sites before the collision.

Authorities are uncertain what caused the freight train to derail and have closed the rail line between Vöhrum and Peine for cleanup and investigation. Their efforts are expected to take until at least Tuesday. Long-haul trains will be rerouted while alternative options for commuters will also be available, national rail provider Deutsche Bahn said.