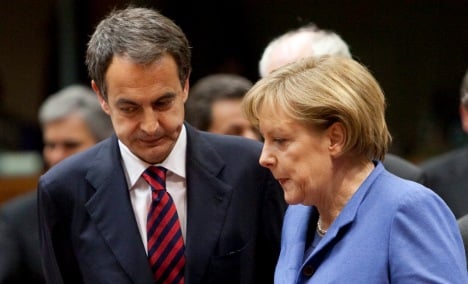 “I think you have to look at what Spain has done over recent weeks, taking strong decisions,” Chancellor Merkel said Wednesday on arrival for talks outside Brussels with conservative EU allies on the eve of a summit set to be dominated by fears over Spain and Europe’s economy.

The Spanish government earlier in the day adopted labour market reforms, on top of radical earlier cuts in its public spending plans that Merkel particularly highlighted.

“We should encourage Spain by stressing that it is taking the right road and that by going this way, Spain is contributing towards (global) competitiveness for Europe as a whole,” Merkel added of reforms that, if passed by the Spanish parliament, will make it easier to hire and fire people.

Spanish business daily El Economista said on Wednesday that the IMF, the EU and the US Treasury had drawn up a liquidity plan for Spain including a credit line of up between €200 and €250 billion.

The European Commission and the Spanish government both denied that any bailout is in the works, with Brussels dismissing the report as “rubbish.”

But IMF chief Dominique Strauss-Kahn announced on Wednesday he would visit Madrid this week to meet Spanish Prime Minister Jose Luis Rodriguez Zapatero, adding to speculation over a rescue package.

Strauss-Kahn stressed it would be a “working visit” although he too dismissed the talk of a bailout for Spain.