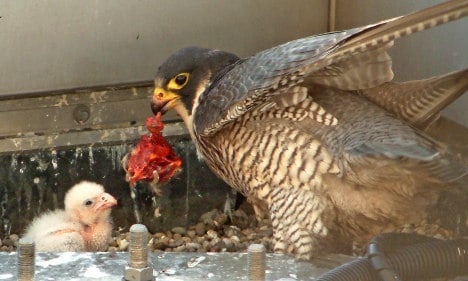 A file photo of a falcon roost at Commerzbank in Frankfurt. Photo: DPA

The bank, located in the country’s financial capital of Frankfurt, managed to display its new logo on one building.

But “in order to not disturb five peregrine falcons who are nesting the yellow banner was not unfurled on the western tower of our headquarters and the operation was postponed to a later date,” the company said in a statement.

Peregrine falcons, a protected species in Germany, have come to nest on their own on the upper floors of the skyscrapers in the Hessian city, feeding on its ample supply of pigeons.

By the 1970s Germany’s peregrine falcons had died out due to pesticide, but the birds of prey have made a comeback. Last month 32 pairs were reported to be living in the states of Brandenburg and Mecklenburg-Western Pomerania thanks to conservation efforts and work to re-settle the birds in the region.