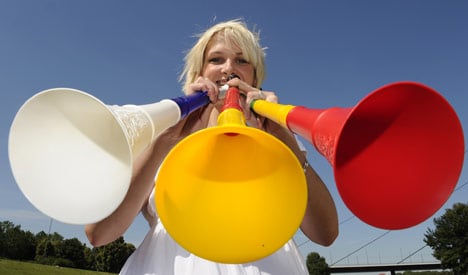 Cherished by South African football fans, the one-metre long plastic trumpet produces a drone like a giant swarm of bees when thousands are played at once, sparking a growing backlash from broadcasters, fans and even some players.

But Frank Urbas and Gerd Kehrberg – who acquired the resale rights for the European Union from the vuvuzela’s South African maker Masincedane Sport in March last year, are betting business will be brisk despite the controversy.

Today’s Vuvuzelas are a modern spin-off of traditional instruments made from spiralling kudu horns – kudus are a kind of antelope. Several million of them have been produced in Germany, which makes up 90 percent of all sales in Europe, says Urbas.

Most are sold to petrol stations, supermarkets or to businesses who hand them out as client freebies.

Asked about the venture’s profits, Urbas said: “We have nothing to complain about.”

World Cup organisers Monday denied they were mulling a ban on the deafening horns, as the chairman of the South African organising committee had appeared to suggest. They insisted the vuvuzela was a symbol of the tournament.

A recent survey found the sound emitted by a vuvuzela could reach 127 decibels – louder than a drum’s 122 decibels, or a referee’s whistle at 121.8 decibels.

In Germany, the horns have been banned from a number of open-air football events in Berlin, Bavaria, Dortmund, and Gelsenkirchen, with media printing warnings of their potential to cause hearing damage.

But on Sunday, vuvuzelas striped in the red, black and gold of the national flag, were still seen dotting streets in Germany as fans blared out their approval to their side’s decisive 4-0 victory over Australia.

South African manufacturer Masincedane Sport bowed to the row over the noise levels of the horn on Monday, saying it had come up with a quieter version which will pump out 20 decibels less. Urbas also says the German-made vuvuzela, which dismantles into three parts “so that it cannot be used in a fight” is some 20 decibels quieter than the regular South African version.

A former manager of Germany’s Oberhausen second division squad, Kehrberg says he spotted the business opportunity back in 2007.

“As far as we are concerned, the vuvuzela as a product is inextricably linked to the World Cup,” Urbas added.

But he did not rule out the chance of a second life in Europe for the controversial horn.

“Maybe the vuvuzela could work for sports that are already very noisy, like Formula One racing,” he mused.