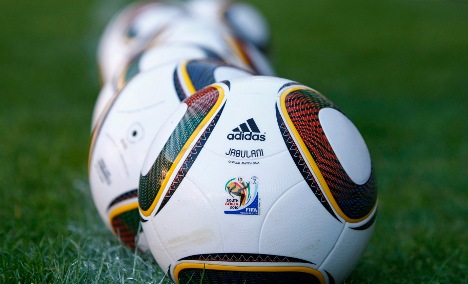 The controversial Jabulani balls were introduced by Bundesliga clubs sponsored by their German-based manufacturer Adidas in February and Carragher believes that has given England’s biggest rivals an edge that was apparent in their impressive 4-0 win over the Socceroos in their opening match on Sunday.

“That is exactly what we were saying as we were watching,” Carragher said. “It gives them an advantage anyway. The ball is very different. Every training session we do we always start with a ball between two, passing 30 or 40 yards to each other just for that reason alone. I am sure it has helped them.”

FIFA and Adidas insist that any difficulty players have encountered with the balls here is down to the effect of altitude, not anything to do with the design.

That stance has been disputed by numerous players and Carragher believes designers will always try to tweak the specifications of balls to generate more goals.

“When you are making a ball for the World Cup the idea is to create more goals I think and get it to do strange things to make it a more exciting tournament,” he said. “But every cross I have seen has been overhit. It goes over the back post. I haven’t seen anyone get a free-kick over the wall yet.

“It just seems to sail straight over the bar. Looking at the start, maybe it is not doing what people expected. People thought there would be more goals but apart from Germany I don’t think there have been too many goals in the tournament.”

Despite his criticism of the ball, Carragher said nothing should be taken away from an impressive performance that underlined that Germany will once again be a force to be reckoned with at the World Cup.

“They played so well. I am not looking for an excuse. It is something to cling to, that they might have been playing with the ball (for longer). I have had two or three texts about it.”

Carragher added: “If you watch Germany and the teams come up, you wouldn’t say the names roll off the tongue. But then when you see them in action and how they played against Australia it was very impressive.”

England’s players, who could face Germany as early as the second round, were impressed by the creative quality of 21-year-old Mesut Özil, the chief engineer of the demolition job on Australia.

“Right from the first two touches you could tell he had a bit of class with his left foot,” Carragher said. “You could tell straightaway he is a talented player.”

Germany’s positive start with what was supposed to be a squad of modestly talented, inexperienced players is in sharp contrast to the stumbling entrance to the tournament of England’s star-studded squad, who were held to a 1-1 draw by the United States on Saturday.

Carragher admits that the German mindset may be more geared to delivering success in football’s biggest tournaments.

“What they may have is a belief of always being there at the end. Maybe that continues,” he said.