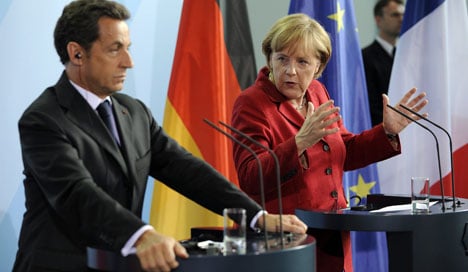 “Our position is of course unified on the need to maintain and strengthen the (EU stability and growth) pact, on sanctions, and on the proposal that we are making together of a suspension of voting rights,” French President Nicolas Sarkozy said after talks with Chancellor Angela Merkel in Berlin.

The two leaders also said they would jointly call for a bank levy and a tax on financial market transactions at the next meeting of the G20.

“We have agreed that we will write a joint letter to the current president of the G20, Stephen Harper … making clear our expectations for a successful G20,” said Merkel.

The leaders of EU heavyweights Germany and France were keen to patch up fundamental differences on how the bloc should change in response to a crisis that has shaken it to its core.

Three days before a full EU summit, France and Germany tried to hammer out how to run European economic policy and on the extent of coordination between the 27 members and the 16 countries that use the euro single currency.

Sarkozy dropped his call for a new secretariat for eurozone members following talks with Merkel, who had been considerably more sceptical to such ideas.

“We would be better off making the European systems a bit lighter by not creating institutions, to focus instead on being more pragmatic,” he told reporters.

Merkel and Sarkozy’s meeting in Berlin comes a week after a summit was abruptly postponed due to “scheduling difficulties,” fuelling talk of a breakdown in already tetchy relations.

A spat over EU policy after eurozone members scrambled to prevent Greece defaulting on its debt, and to agree a near trillion-dollar rescue mechanism to stop others suffering the same fate, was seen as the more likely reason.

Paris had wanted what French officials call genuine “economic government” for the eurozone, with regular meetings of the club’s leaders and a secretariat to deal with its administration.

But Berlin was opposed, preferring instead improved coordination within the wider EU, tougher penalties for fiscal sinners and ensuring the independence of the European Central Bank.

“[The] chancellor’s position is that the 27 members states see themselves as part of an economic union who therefore feel responsible for the growth strategy of the whole EU,” Merkel’s spokesman said Monday.

The EU’s new President Herman Van Rompuy appeared to side with Merkel in a visit to Berlin last week, while Italy and Spain have signalled they are erring more towards the French vision.

A senior official in Brussels dubbed the spending cuts “anti-European,” saying that Germany, Europe’s biggest economy, needed to do more to boost domestic demand to spur growth across the continent.

Nevertheless, on Saturday, Paris unveiled a saving plan of its own amounting to €45 billion over the next three years in a bid to get its public deficit down to more manageable levels.

Both sides have already sought to play down their differences, publishing for example a joint call for faster action on regulating the financial markets ahead of this month’s G20 summit in Canada.

In an interview late last week with the daily Frankfurter Allgemeine Zeitung, Merkel said the Franco-German motor was still functioning. “All important decisions have been prepared and taken together,” she said.